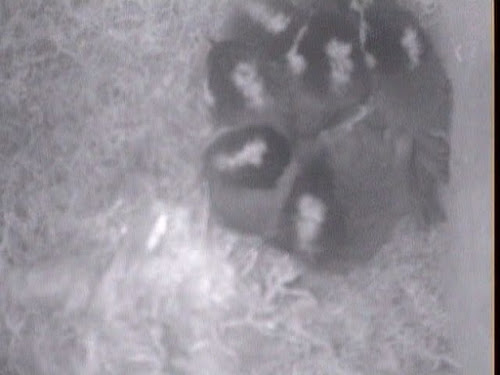 In complete contrast to the late evening, torch garden wander looking for moths last night, it was a very early start wildlife watching indoors this morning. My alarm was set for 4:15am and I managed to successfully complete the task I had set myself – to get up!

Suspecting strongly that our Coal tit chicks would fledge this morning, I really wanted to see them leave. It feels such a privilege to have watched this family grow up in our nest box. The reality is, this may be the one and only time we will see Coal tits use our nest box (usually used by the bigger Blue and Great tits).

By 8:00am I had breakfasted by the monitor screen and was wearily writing a note for my husband explaining I was going to need a very long lie in this morning. I didn’t want to wake him when I returned to bed.

To my surprise, he took over the nest watch when I was sleeping and recorded some clips for me to see which was lovely. The one below, he was especially pleased with, shows a chick jumping up to the entrance and looking out. It does this more than once too, running back to the others like it was in trouble when it sees the parent coming in with food.

Light rain persisted most of today. I suspect it was deliberate that the very attentive Coal tit parents kept feeding their chicks in our nest box. Perhaps they knew that a rainy day wouldn’t be a good fledging day. That’s just a guess on my part though. Maybe the coal tit chicks weren’t quite ready anyway, either way, they didn’t fledge this morning nor this evening when we were all back on nest box watch once again.

Another early rise is not on the cards for tomorrow morning. I suspect the nest box will be empty when I look in on it then. As I’ve been uploading the video above and writing this blog I’ve had the IR camera view on (different angle than the daylight one) watching the chicks for as long as I can. I’ve seen them sleep, waken, fidget, wing stretch, move position in the group and settle down to sleep again, a few times over.

One final image of the 2016 Nest box family of seven coal tits.
Good luck for tomorrow and the world outside this cosy nest box.
Stay safe little chicks and haste ye back 🙂