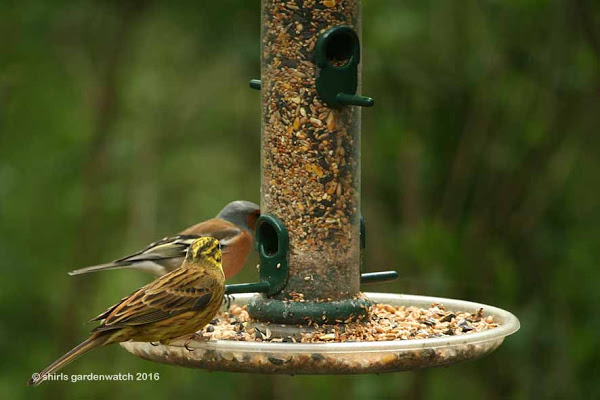 Today’s ‘do something for wildlife’ was a very quick and easy job. It will reduce the spilling of bird seed (mess and waste) and smaller birds will appreciate the extra space for landing, perching and feeding. Less trampling of plants below the feeder will be great too 🙂

Being Father’s Day here in the UK, it was a family day and no gardenwatching until late evening. The feeders had been busy in our absence. When refilling them, I remembered I had purchased a small tray that screws into the base of my seed feeders and it was still in the packet.

Tray fitted, I enjoyed a peaceful hour at the end of a busy day watching for birds using it. None came, but it was after 8pm on a dark wet evening. A female Blackbird, a Dunnock, a female House Sparrow and two Woodpigeons were the only visitors I could see and they were feeding on the ground.

It was on our last visit to see the Ospreys at SWT Loch of the Lowes (live cam on nest) that I spotted this smaller size of feeder tray. I liked that size! One of my favourite birds to see there was using it too – the Yellowhammer.

On this occasion, seeing as he was with us and he gifted me a new zoom lens for my birthday, I handed my camera over to my husband and suggested he tried it out. As well as a great female Mallard duck capture, he took images of the feeder tray that had caught my eye. Seeing as it’s Father’s Day, his photo captures are the ones I am posting tonight 🙂 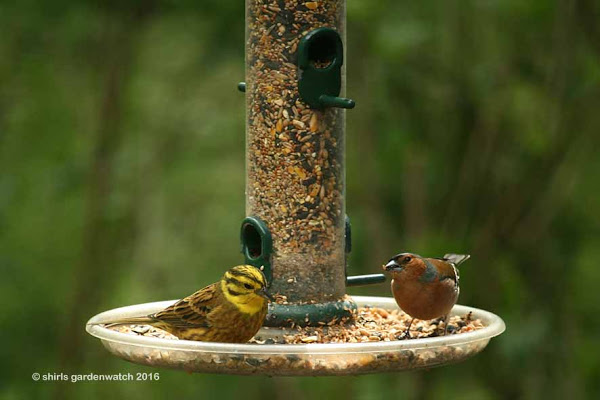 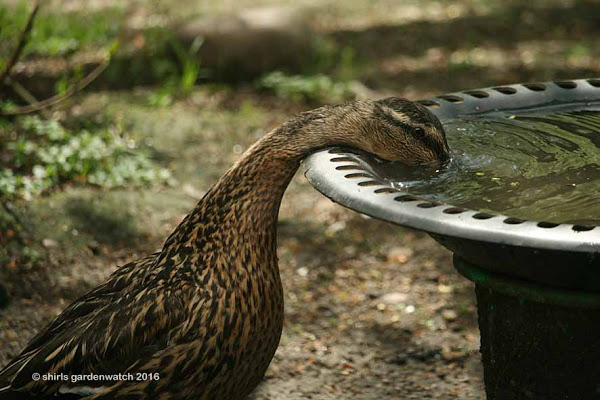 Having previously used one of these trays, I found two things I’d like to pass on. The first is that overtightening of the butterfly screw (supplied with the tray) can break the threads. I’ve done that.

Woodpigeons hogging the feeder is the other! Yep, once they discover they can land on the larger tray, the smaller birds can’t get a look in! The feeder becomes like a swing at a children’s playground when two make it on board – back and forth it goes as they demolish and scatter seed.

Time will tell if a Woodpigeon can land on the smaller tray (I will report back). I really hope they don’t. They’ve got plenty of other feeding areas they can manage. In past winters, with heavy snow, I found many species of birds feeding at the same time using the tray. I’d like to see if the same will happen with a smaller tray in the summer months 🙂