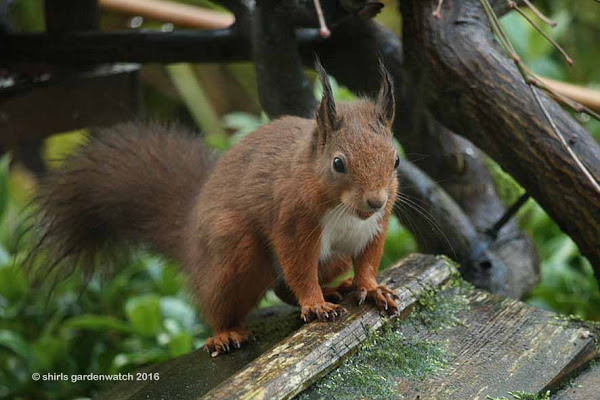 Now… I can properly claim to having had our native red squirrel visit my garden! This is fantastic news and I’m hoping it indicates that the smaller charismatic red squirrel is recovering against the larger greys, whose arrival to the UK has led to it becoming seriously endangered. This could be evidence towards a positive future for this well loved wildlife species here in the UK.

Growing up in a more northerly part of Perthshire, where the red squirrel was regularly seen at the time, this animal truly symbolises the wildlife of my childhood growing up in Scotland. At the time it was just part of the landscape and I guess I took its presence for granted. Magnificent highland cows grazed in the fields over a busy main road opposite my house and red squirrels ran up trees and across the ground around them on my woodland walks.

Gathering photos yesterday, I had planned to select the best ones (so many were blurred with the the speed and change of direction the squirrel made) and post them in the evening with just a few captions (almost a Wordless Wednesday post) but my blogging time ends up quite late in the evening and photo sorting took longer… and then I began to write :-0

So here I am at the PC finishing breakfast and this post celebrating the return of the red squirrel and outside my window it is running back and forth taking nuts from the table. Just how magical is that!

Oh dear, a magpie is on the house roof looking down at it… I wonder if it is a threat. Gardenwatching the red squirrel is beginning in earnest now! Phew… it was the grated cheese I scattered on the ground beside the feeders last night that the Magpie was interested in. 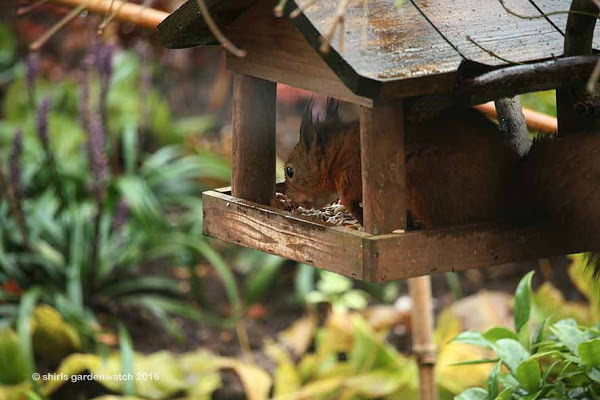 A blackbird appears to be making calls from a perch nearby as the red squirrel feeds on nuts. It is probably objecting to this new diner but it is standing its ground. New garden arrivals are always closely watched by the regular visitors. Observing the hierarchy of garden visitors is always interesting for the indoors gardenwatcher to see too.

Oh dear again, a white cat with black and grey markings has just wondered under my window – it looked huge and so slow after watching the tiny, speedy red squirrel. I’m slightly regretting opening the window and hissing at the cat to scare it away now. Hissing cats away from the ground feeders outside my window is something I do – it usually works too.

Ah… the red squirrel is back… I think I need to replace my cold cup of tea with a strong cup of coffee! Ah… that’s better, a pot of coffee, a yogurt and back to yesterday’s photos and what I wrote last night… 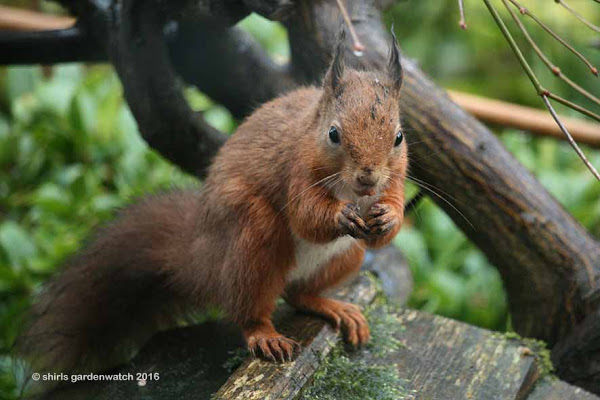 Wow, really wow, ten years ago I could never have imagined that I would be contributing to statistics monitoring the numbers of red squirrels. Last night I added my sighting to the website Saving Scotland’s Red Squirrels where a map can be viewed on their distribution. I didn’t see many reported in my area so adding my sighting has real value here.

Should you ever see the red squirrel in your area of the UK, there will be conservation groups who will welcome logging your sightings so please report them. All the data we supply for species that are endangered does really make a difference in terms of its survival. 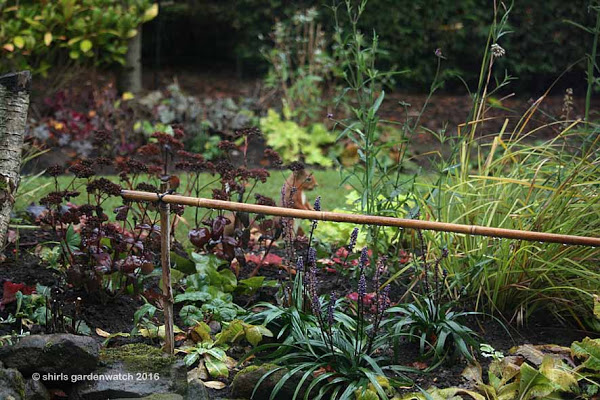 You’ve got to keep alert in those busy garden borders!

By planting a garden with trees, shrubs, ground cover, flowers, water and putting up feeders with a variety of foods, our gardens can support a wide range of wildlife. Pre blog, I had absolutely no idea how much of a little nature reserve our gardens can actually be. What a difference ten years has made to my garden style and appreciation – unbelievable :-)))) 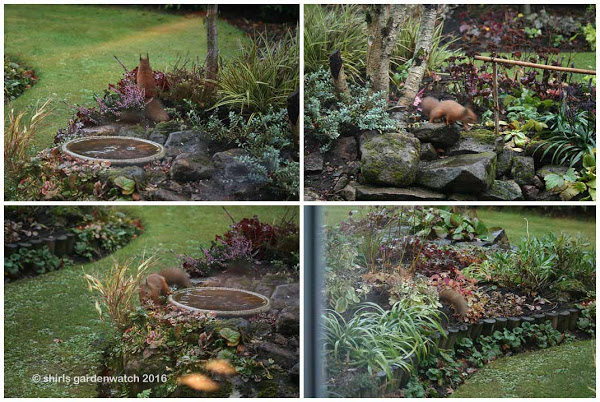 Round and round we go, the garden can be quite an adventure
for a red squirrel new to the area. Getting clear photos was very tricky.

Running back and forth in front of my gardenwatching window, for the hour’s duration of my daughter’s test, was properly distracting her enough that she considered closing the curtains but she didn’t want to scare it away. One particular distraction I am seriously jealous of. Although she called me through I didn’t hear her as the squirrel jumped up on to the window sill and looked in my gardenwatch window straight at her! I doubt anyone would believe her accounting test added an unexpected number to red squirrel records for 2016 🙂 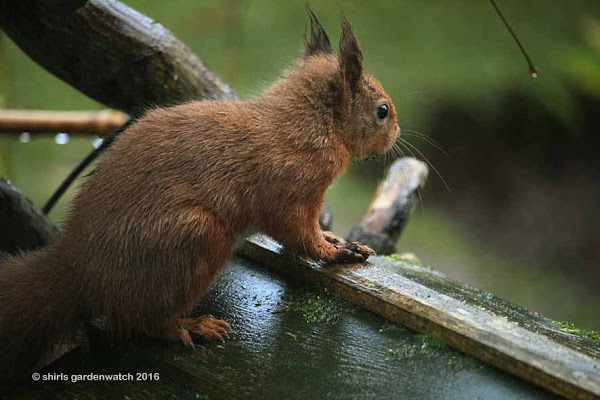 Little did the red squirrel know that it was facing the direction of a feeder on a post especially put up for it. The pine tree was only a temp overnight location. 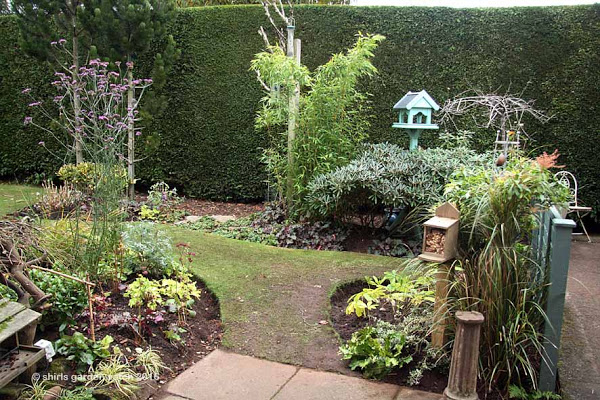 The bird table roof is bottom left, the squirrel feeder on the right with a bird bath pedestal sited as a possible perch.Muddy record photo after border replanting.
A photo of the feeder nut pattern is currently set as wallpaper on my phone home screen so I can see at a glance if the lid has been opened in my absence 🙂

Finally, that red squirrel didn’t half explore my garden and its borders yesterday. At one point it jumped from the potting shed roof straight across to the face of my leylandii hedge and ran up, down and across it before returning to the bird table. What an entertaining little acrobat it was!

Sunflower hearts were quickly put out in a small ground feeder to distract a woodpigeon, the previous garden assistant, but when the red squirrel spotted this it munched a while there instead. Ha-ha… but the woodpigeon ate the trail of peanuts leading to the new squirrel feeder first 😉 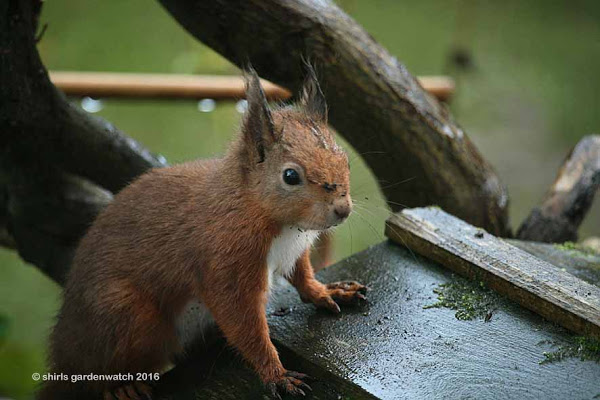 Yesterday, was dull with showers. The red squirrel got a bit muddy gardening 😉 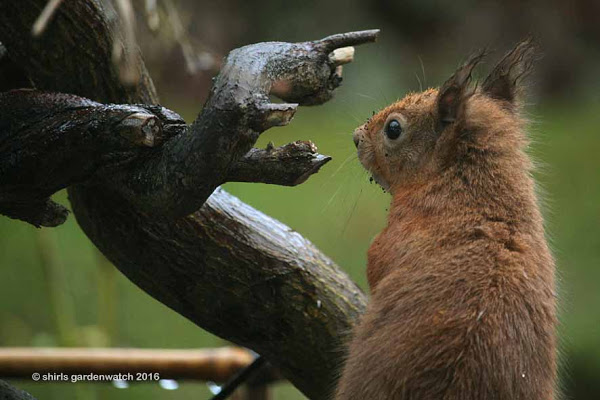 My favourite muddy face from yesterday. In contrast, snow is forecasted for today. I wonder how the red squirrel will behave in a very busy garden.

You have to be patient in getting wildlife to use what you put out/up for it, that’s another thing I’ve observed over the last ten years blogging and gardenwatching. The fun part is the anticipation and the bonus is it happening. Now, I’m awaiting the red squirrel discovering the feeder with the hinged roof full of nuts that has been put up in my garden especially for it. Currently it is running right under it! There’s definitely a bit of a seasonal pantomime feel in the garden just now… hey red squirrel… its above you 😉