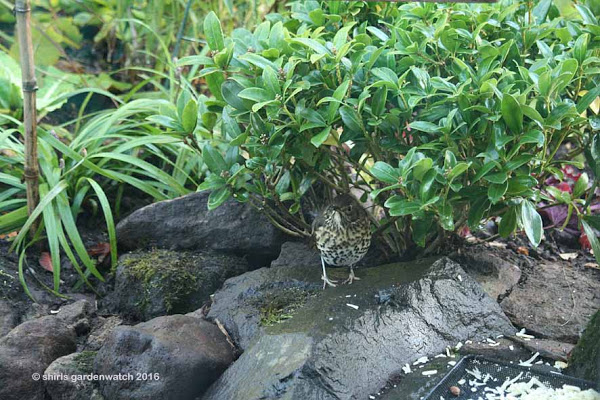 Earlier in November it was a Song Thrush that was catching my eye through my gardenwatch windows. Quick, bouncy steps and fast runs it took through garden borders before disappearing under the hedge, in a way quite similar to the red squirrel currently visiting the garden. However, this Song Thrush was much more cautious. Photo captures revealed it perhaps had reason to be too!

Gosh… would you just believe it? Something moving out my window, this sunny Sunday morning, has just distracted my eye causing me to look up and see a Song thrush, out in the open, feeding on an apple I spiked on a bamboo cane! This sort of wildlife timing, when I’ve been writing a blog, has spookily happened many times over my blogging years.

The video camera was on the tripod this time. I collected a very brief clip before my very slow movement towards the camera scared the Song thrush away. Ah, well. Was it the same bird as earlier in the month?

That I can’t tell, but there will be clues to look out for if it returns to feed on this or any of the other apples currently spiked on branches to attract the groups of Fieldfares and Redwings currently flying over the garden towards the berries on my neighbour’s Rowan tree.

I’m loving the increased bird activity around the garden just now. I’m also enjoying looking out, over my garden hedge, towards a few very tall, mature trees that are very popular look-out and sunning spots for passing groups of birds. Large groups are gathering on them just now and it was on one of these trees I spotted Waxwings a few years back.

The apple feeding song thrush has just returned and it doesn’t look like it is the same one either! That’s fantastic news as this species that is on the ‘red’ endangered list here in the UK. Perhaps, when the rowan berries run out, the fieldfares and redwings will follow it here 🙂

For now though, I’d like to share the visit of a nervous Song thrush that visited the garden back on November 12th. At the time, I was delighted that my recent shrub move, to give birds some shelter from predators, was used for that purpose so soon after it was planted 🙂

A small skimmia, with a few branches trimmed back makes a great shelter. 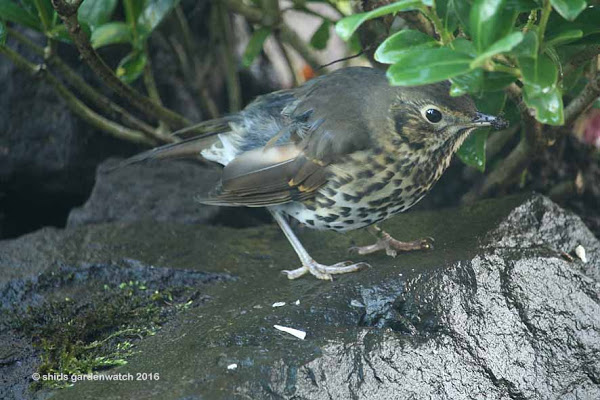 Tufts in back feathers made this song thrush easily recognisable. 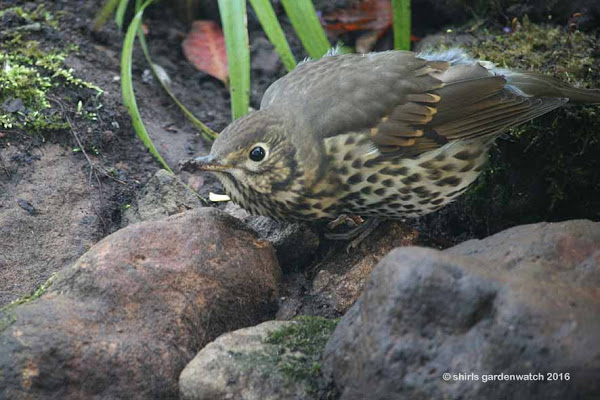 Once out in the open, it was spotted ducking it’s head low, I couldn’t see why. 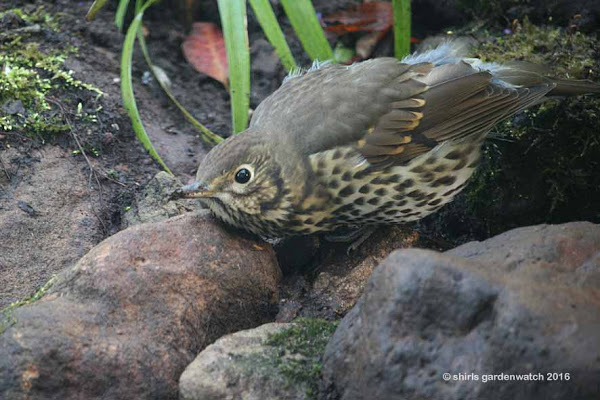 Resting its head on the stone, it made me think of ospreys lying flat down
when predators fly over their nest. I’ve seen that a few times. 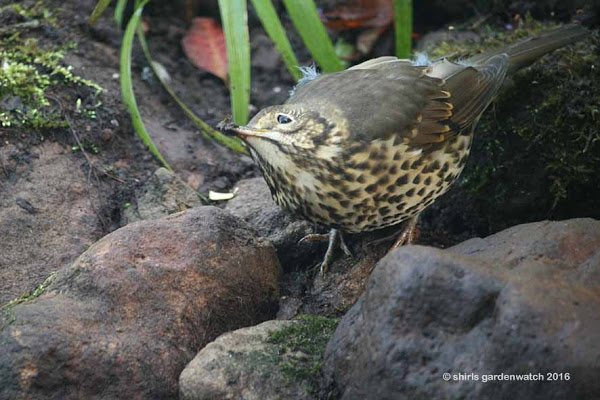 Then it looked up to the house roof, woodpigeons often wander along there. 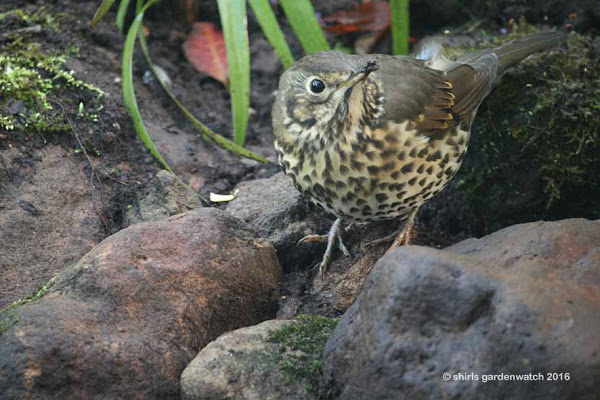 Alert over then, a muddy beak suggests it found food around the pond.
Tiny bits of duck weed on its feet suggest it was in the water. 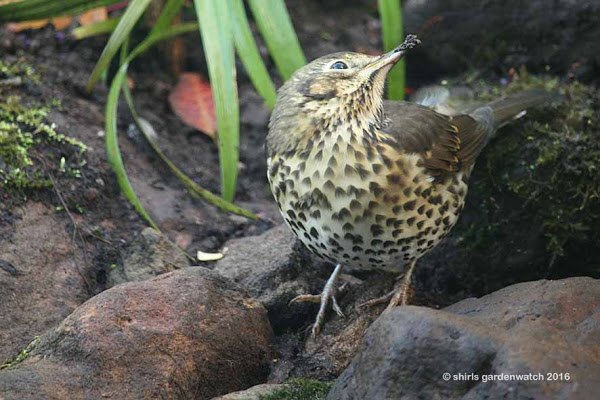 Nope, something up on the roof is still making it nervous. 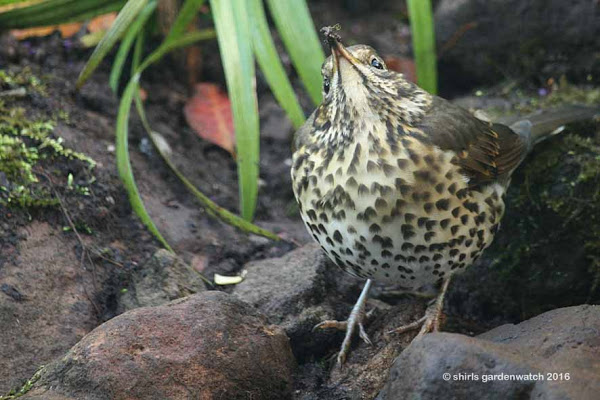 It’s doubtful that it’s a Sparrowhawk as it would have made a move by now. 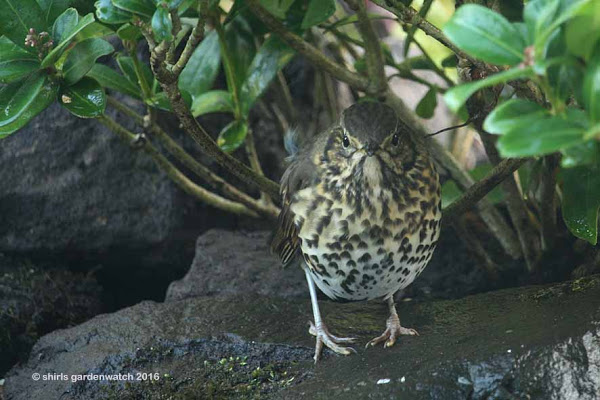 Perhaps, it’s time to take cover again. Shrubs really can be great for wildlife.
I found that positioning them in areas where birds pass by works well. 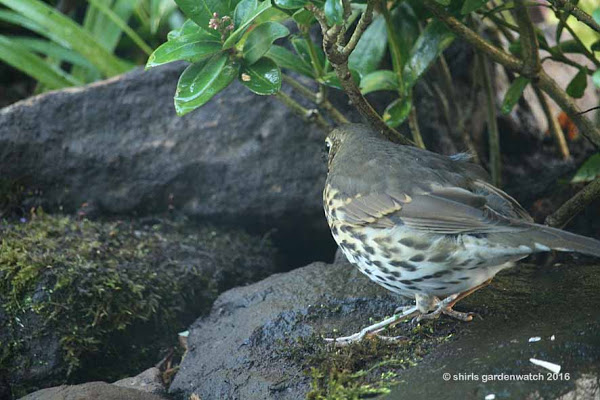 The pale brown back of the song thrush is a great camouflage over the rocks. 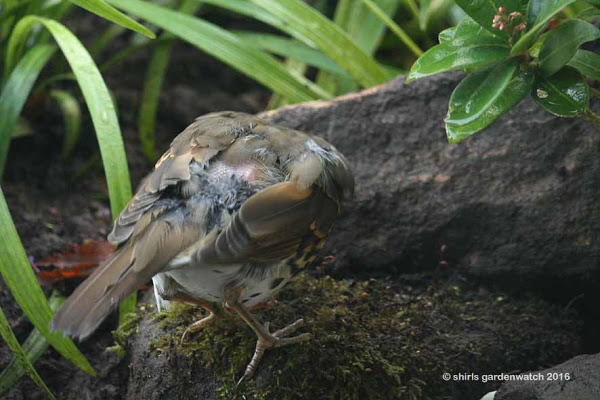 The value of taking lots of photos reveals the likely reason for the nervousness of this song thrush. Feathers missing on its back suggests a Sparrowhawk catch. 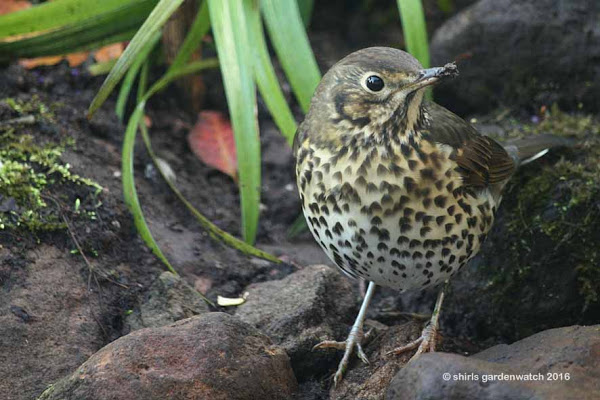 The power of editing a photo, it looks feather perfect from this view.

The storytelling a set of wildlife photos captures allows is just great. Most of the time we can only take a guess at what they reveal, but it absolutely makes us want to understand and learn more. We don’t need to be wildlife experts to appreciate small details of the world just outside our windows. It’s just sitting there waiting for us to notice it 🙂 Did you notice anything new in your garden or out and about over the weekend?

5 thoughts on “Song thrush on alert”