It’s fair to say that when a bird, butterfly, damselfly or in this case the red squirrel visits the garden, unless there is more than one at any given time or a distinctive difference in its appearance (like partial albino or missing feathers) you have no idea if it is the same individual returning.

Having never seen a Red squirrel, ever, in my garden until the beginning of the month I never remotely considered there could be more than one visiting. Until late last night that is! Expecting more than one would be just pure greed wouldn’t it?

Keen to publish as many of blog posts as I can before the end of the year, browsing photo folders, I discovered a few red squirrel photos (taken only as quick, hand-held record shots by the look of the focussing in them). Blurry photos are easy captures with red squirrels when they move so fast.

Very fortunate it was then, that I hovered ever so slightly over my PC mouse before clicking delete. Something caught my eye in these blurry and rather heavily orange toned, red squirrel captures. The date revealed they were taken the next day after we were witness to a red squirrel running around the garden stashing peanuts – expecting it to return would be no surprise.

Just four shaky photos confirmed two red squirrels have visited the garden this month. Actually, within two days. Wow, November 19th saw shirls gardenwatch reach ten yrs old and what a reward this is! That is just fantastic news. Now, I will photograph every red squirrel I am fortunate enough to see and compare markings and colouring 🙂 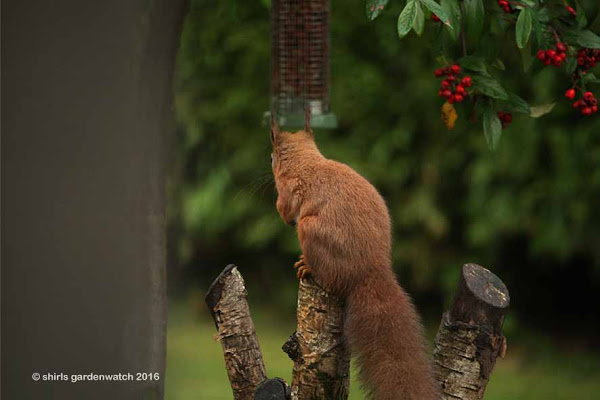 Nov 16th: The red squirrel that stashed peanuts in every border of the garden.
For winter (snow) I stashed part of our pruned rowan tree trunk in a border
as a perch for birds. I could never have imagined a red squirrel would use it 🙂 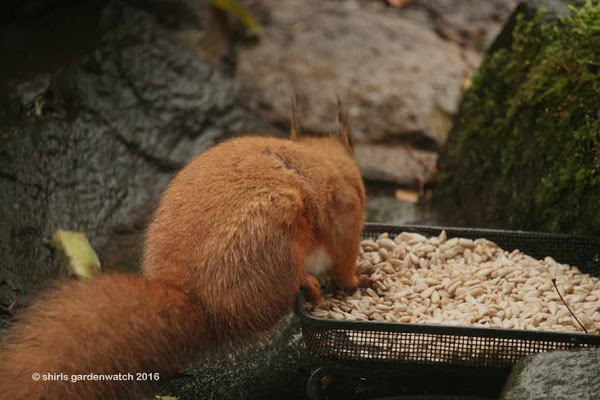 Nov 17th: Red squirrel No.2 with colouring more orange. I failed to edit tones to match so clearly they don’t. A closer look half way along its back reveals the biggest difference and confirmation they are at least two indiviuals visiting. 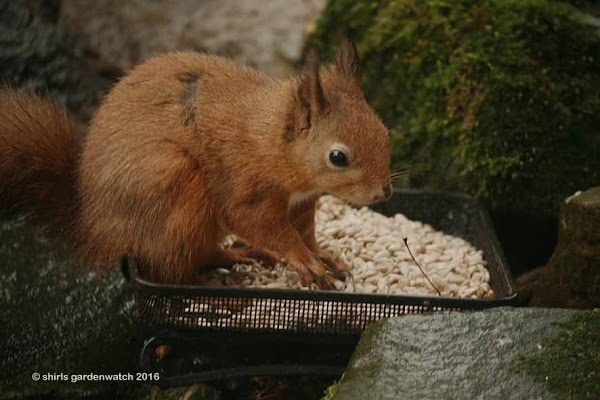 Nov 17th: Red squirrel No.2 side view showing bare area of body fur on back.
I am guessing a left over from moulting. Perhaps it’s my imagination, but this individual looks less confident about its head suggesting it could be young. 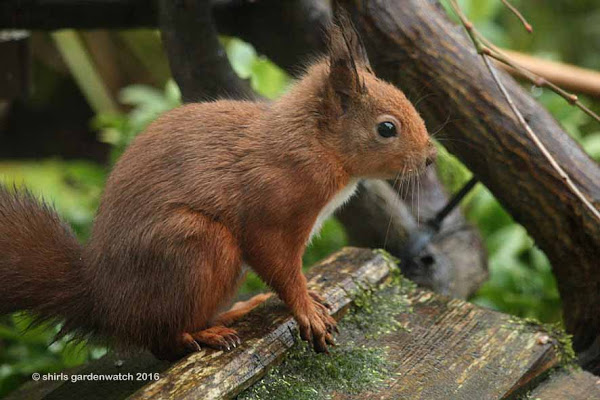 Nov 16th: The stashing peanut red squirrel again for comparison.
After much searching this photo shows best available like for like view.
There are both dark and blonde tones in the tail of this individual too.

So there we have it, November 2016 gets the award for the best blog month out of ten years’ gardenwatching! It’s still got one more day to go yet too and this lunchtime, from my gardenwatch window, a large group of Redwings and Fieldfares were spotted in the distant tree again. The likelihood of being at home at the right time tomorrow , should they descend to my garden apple offering, is very low. But never say never 🙂

Ah yes, I shouldn’t forget to add that I did see on twitter last night that Waxwings were seen a few streets away yesterday lunchtime! They were most likely passing by en route south, but fantastic to think they have been in the area too. I’m not being greedy with them either, they are quite special winter visiting birds too. I’ll be happy to just see them in the distant tree where the Redwings perch 🙂