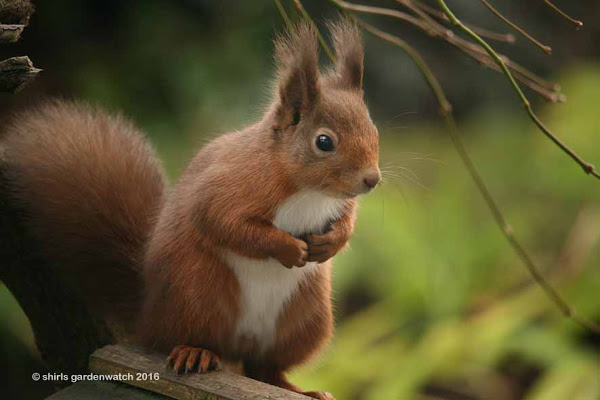 Fantastic news, red squirrels have continued to visit the garden and are showing just how photogenic they are. When they stay still long enough to photograph that is. Video captures are another matter entirely, more patience and the right timing is required there.

It’s fair to say that red squirrels are keeping me alert at my gardenwatch window. However, I’m no longer looking to the mature trees outside the garden for visiting Waxwings to the area. Oh dear, via twitter chat, it appears that good numbers have been spotted on the street that backs on to my garden! Aw… I guess I can’t really complain though given what we’ve been seeing 🙂

Yesterday, after a successful experiment with a clothes peg as a prop to keep the squirrel feeder lid open enough for the nuts inside to be clearly seen, red squirrels managed to work out they could get them out. Yay! Great news for visiting birds too as that leaves the low bird table free for them again. Here’s some storytelling images since last time…

DEC 2: What fabulous facial and body expressions the red squirrel has 🙂 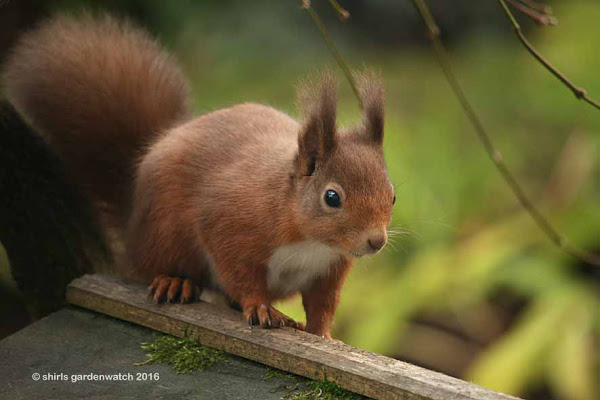 DEC 2: What endearing little characters, a privilege to be putting food out for 🙂 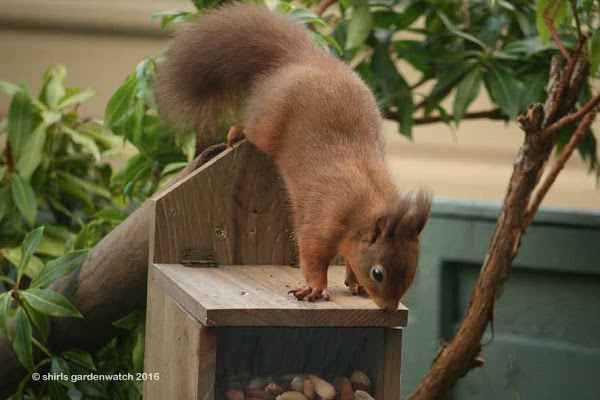 DEC 2: I thought they would have worked out the feeder roof lifted up. 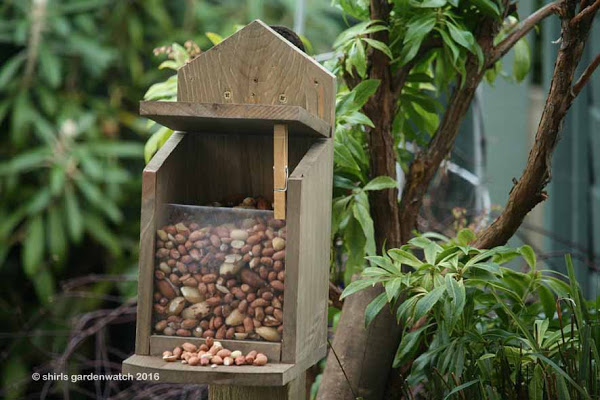 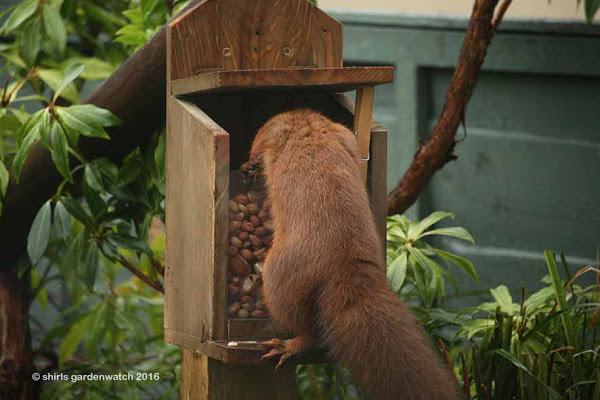 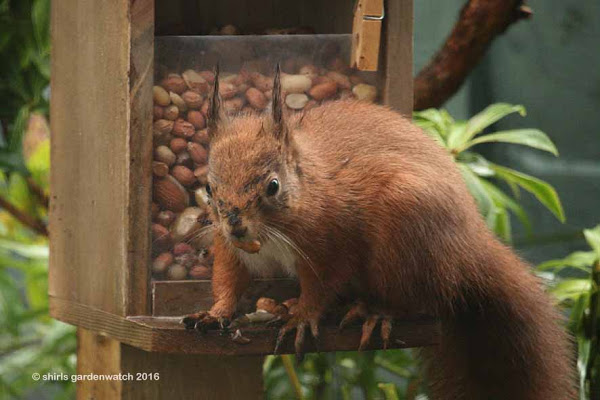 DEC 9: Muddy faced gardening red squirrel, about to hide nuts in the borders.
Magpies are watching you don’t you know, high up in a neighbour’s tree :-0 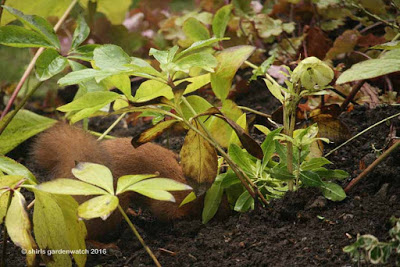 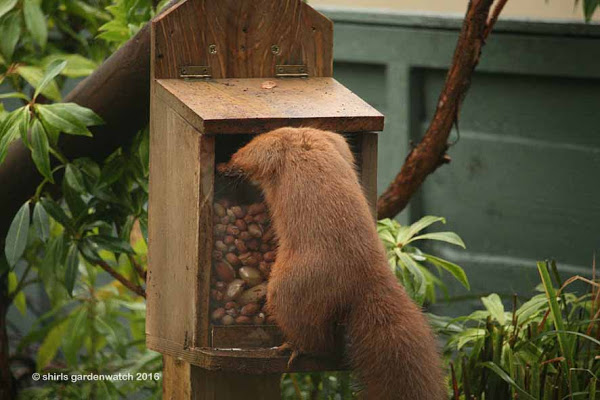 DEC 9: Stage 2 of the clothes peg prop experiment, it’s removal is a success! 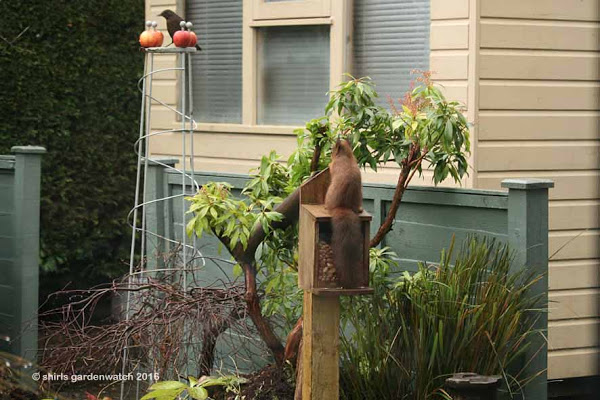 DEC 9: The longer view of the feeder area shows the red squirrel quite comfortable now with lots of options to access feeder. Blackbirds have been enjoying the apple feast as has newly arrived, winter visitor, a female Blackcap:-) 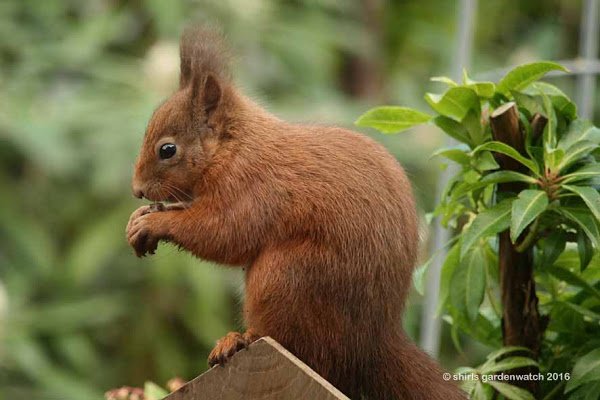 DEC 8: Favourite red squirrel photo capture from kitchen window.
Finger’s crossed they will still be visiting over Christmas and into the New Year.
Ha-ha, I’d better keep the camera out of the kitchen and focus on my cooking!

Finally, yesterday the garden saw yet another major gardenwatch highlight! This one, I’ve seen many times from the observation window at SWT Loch of the Lowes but never in my wildest dreams thought I would EVER see in my garden. We had a red squirrel chase! Round and round the garden they went! Quite intense it got too. How amazing is that, to have red squirrels fighting over a feeding station in my garden! Here’s me oblivious, experimenting with a clothes peg prop too 😉

So it’s clear now, that more than one red squirrel has worked out how to get in the feeder! I naively thought the same squirrel was feeding and stashing nuts for almost 1½ hours yesterday. Further to this revelation, based on photo and video captures, neither have a bare patch of fur on their backs. So that’s confirmation that at least 3 red squirrels have been visiting this small garden, in a small town, with houses all round it. I wonder if other neighbours have noticed them. I hope so 🙂

This post was published by Shirley for shirls gardenwatch in December 2016.