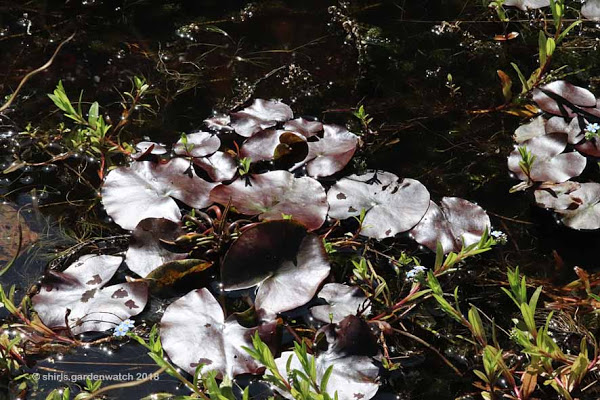 My recommendation for building a garden pond can’t be said enough times. It really is a magnet for both wildlife and humans alike. Returning home at lunchtime to blue skies and sunshine, once again, my pond drew me outdoors to see if there were any large red damselflies around – they have been spotted recently.

Being so tiny, length 33-26 mm (1¼ ins to just under 1½ ins), the ‘large’ red damselfly is pretty hard to spot amongst pond plant leaves, roots and stems – especially the red ones. My tip is just to stand still and wait for movement and then the flying little red ‘sticks’ can be spotted!

I stood less than a minute when I spotted a flash of red clash in the air above the water, then one damselfly landed on a sunny rock at the water’s edge. At first I couldn’t spot where the other went until I spotted movement again and the reason for the clash above the water became clear. The pair of mating large red damselflies moved around the surface of the pond with the female depositing eggs on vegetation just under the surface. I always find this fascinating to watch.

After lunch (not by the pond in this occasion) thoughts went to an experiment for today’s contribution for 30 Days Wild. 15 minutes by the pond was the plan, when there wasn’t a damselfly there already, would one come and how long would it take? I was pretty confident seeing as they had already been spotted. The timer on my phone was set…

The damselfly maintained its horizontal position throughout the 15 minute experiment allowing me time to look around. Oh dear, the drop in water level due to lack of rain has the main waterlily crown exposed – we need rain soon! This is a beauty of a plant :-0

Movement of a long legged fly catches my eye as it lands on a pot of mud. It wasn’t until I uploaded my photos to get a closer look that I realise that this pot had a small waterlily variety that likes a shallow depth! Now this doesn’t look good at all – there’s no rain in the forecast for at least a week either 🙁

I take a step back from the pond to notice three cheddar, trollius flowers. A breeze is catching the cupped flowers in the partial shade. The flowers are just opening but something dark in one of them catches my eye. Photo captures were tricky but I got some angles showing what was inside. I had been expecting a bee when I walked over!

The 15 minute alarm went off on my phone and the statue damselfly remained, still, well passed it. Well, that was a fun and successful experiment. I moved away on a garden wander with my camera returning to catch it moving to a very sparkly spot before flying off. It was very tricky trying to get any focus on this stem! Enjoy sightings and capturing images from your garden this month of June. Maybe you might enjoy a similar 15 minute experiment 🙂

This post was published by Shirley for shirls gardenwatch in June 2018.