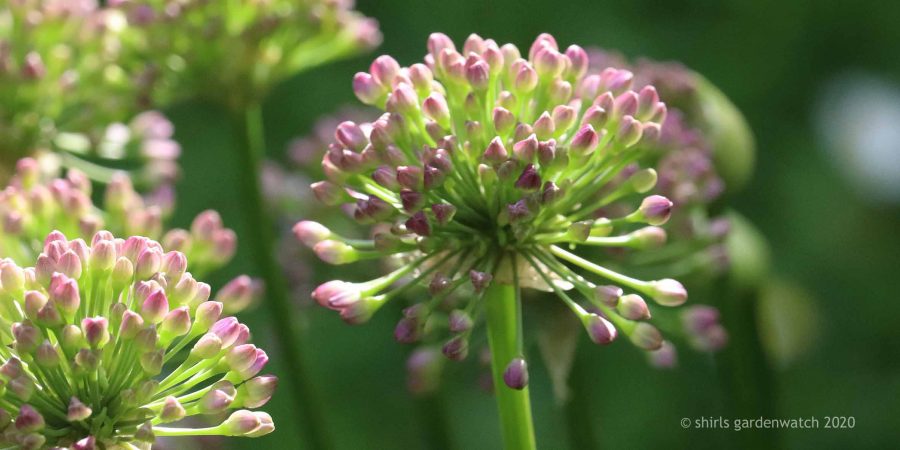 It’s all well and good making wishlists for garden plants, but perhaps in this case I should have written this one in LARGE BOLD CAPS and pasted it everywhere from my PC desktop, paper blog diary to the calendar as a next year note. Ahhhhhh. I really wish I had. I truly do. This one ticks almost every box for me. It’s one enormous tick for pollinators too, I’ve never seen such a variety feeding one flower head, ever.

Being completely honest, hand’s up, when I added alliums to my garden many moons ago it was purely for their form. I loved their architectural look and their purple colour. I began with ‘Purple Sensation’ one of the most popular in gardens here in the UK I’d guess, after much use by designers at the RHS Chelsea Flower Show. A few still enjoy my sunny front garden.

Allium ‘Christophii’ was next with larger more open flowers. They made a statement, I have odd ones left. The short form of Allium ‘Ivory Queen’ followed at the front of a border, but as I am a gardener that continues to move plants, it struggled to survive. I never looked for any more varieties then. Although I loved seeing bees feed on these spherical balls of tiny flowers, it wasn’t until a few years into garden blogging that I started to embrace planting for pollinators.

The planting of the drumstick Allium ‘Sphaerocephalon’ began the real quest for planting for pollinators around the sunnier parts of the garden. Bought again primarily for its different shape, size and colour from the other alliums, this more modest flower head packed a big punch it terms of attracting pollinators. The label suggested it would, but I wasn’t expecting it to be quite so popular. It was a positive haze of pollinators. Hoverflies really loved it, bees too and butterflies when they could land.

This drumstick allium self seeded and spread into big clumps in gravel below the sunny border they were first planted in. I let it. I also lifted some and brought it into sunnier parts of my partially shaded back garden. It has thrived there too. Again I lifted it and spread it around. All is not perfect with this plant though as it flowers on very long stems which can bend quite far with the wind. It needs the support of other plants around it.

Allium ‘Globemaster’ arrived next via different means, a plant sale in a neighbours garden. She was raising money for a local charity. Being late to arrive, nothing caught my eye so not wanting to leave empty handed I picked up three potted alliums with tall stems and buds. The label read globemaster. I discovered it was a tall flowering plant, found a place in a border of my back garden and it has been one of the lucky few that haven’t been moved since it arrived! It has repaid me with glorious flowers that the bees love. It looks great below my white scented chinese wisteria.

Now to the perfect allium for me, Allium ‘Millenium’ bought last year sometime as an impulse buy. I have no idea from where now. I wish I did. I do remember liking the almost grass like, glossy green foliage and the pots I picked up had a lot of flower stems. The label had said it was a perennial and that it attracted pollinators with its rosey-purple flowers. I unusually bought two rather than three. I guess I wasn’t completely sure on it at the time. I most definitely am now and my plant wishlist note was not to pick up a new plant, it was to get lots more of this one to spread it around my garden. I would 1000% recommend this plant as a garden plant for both pollinators and gardener alike. Take a look, seen flowering in August 2019….

Looking at these images now brings me completely back to the moment I walked by this plant to the party of pollinators around them. The phrase of pollinators buzzing around plants that are to their liking is often used, but this was to a completely different level that I have ever seen. I was absolutely transfixed and even now when looking up my images for this post I became so again. I really can’t wait to see this again. This plant, dangerous to put this in writing given my track record, won’t be moved until it needs to be divided. At a full height of only 40cm it’s going to trump any other in my garden when it opens its flowers.

Looking up a little on this plant, I’m thinking it could be familiar with my US blogging friends as it was introduced by a breeder in Massachusetts, Mark McDonough. Although it was introduced in 2000 it wasn’t registered with the spelling of Millennium, with two n’s, but is often listed as it. Looking at other introductions from this breeder I see a few familiar plants from my garden. My brunnera ‘Jack Frost, cranesbill geranium ‘Rozanne’ and another new arrival of 2019, Rudbeckia ‘Goldsturm’ are well travelled from a man in Massachusetts. Maybe I have others too.

Allium ‘Millenium’ was an unexpected, great find from a garden centre that I would love to share with everyone planting for wildlife. You don’t need to be a gardener for this one but if you are you won’t be disappointed as it is a brilliant border plant too. I guess it might grow in a pot also. Are there any star plants from your garden that would like to share in a comment? It would be great to share them too.

4 thoughts on “Allium ‘Millenium’, the one for me”