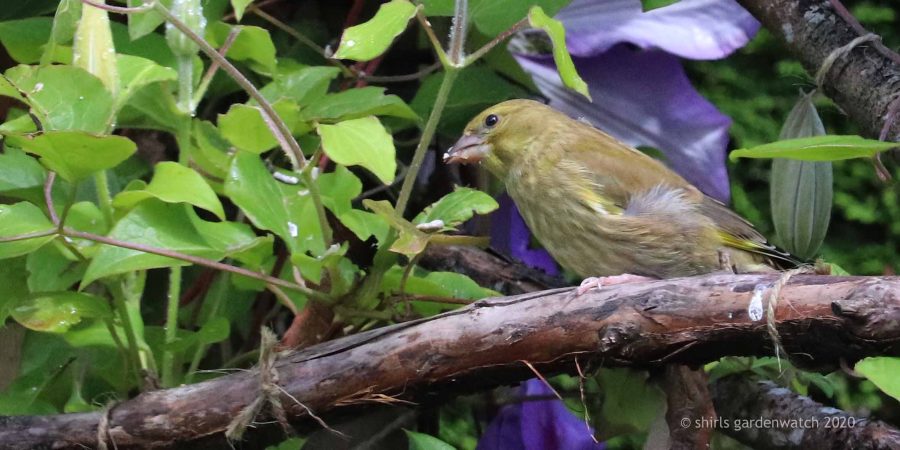 It’s becoming empty nest time here. New fledglings are passing through the garden daily. Some return like the Greenfinch above, some we only get fleeting moments of as they land en masse and take flight again instantly. Starlings bounced through yesterday, quietly for a change. This couldn’t have been their first day out of the nest as they usually make quite the racket when they arrive in the garden.

Blackbirds have been the next noisiest as fledglings. They arrived a couple of days ago. Not very noisy this time either. I wonder if birds are sensing less general noise and activity in the gardens here just now. Last week Coal tit, Blue tit and Great tit fledglings were completely unaffected, chirping their little heads off. I’d imagine they seriously caught the attention of cats and Sparrowhawks and needed to keep moving to be safe.

Longer daylight hours, many dry sunny days and finally refreshing rain arriving in the garden has created an explosion of growth in the garden’s plants. We are not through June yet but we’re getting the jungle July look forming already. Seeing any birds at this time of year can be challenging especially as the parent birds go into hiding for their much needed moult. When you do get glimpses of fledgling birds exploring, they can have you sitting on the edge of your seat.

The wildlife pond has been very popular with visiting birds seeing many drinking and bathing there. Having a camera overlooking the pond has been brilliant. I would have had no idea that so many were using it. Crows, Jackdaws, Magpies, Woodpigeon Blackbirds, Robins, Dunnocks, Wren, House Sparrows, Blue tits, Great tits, Chaffinches, Goldfinches and Greenfinches have been seen. I expect there are others I’ve missed too as I don’t look through all captured footage.

I was particular delighted to see the Greenfinch becoming very early regulars. A couple of males would come together too. For some reason I have a soft spot for the Greenfinch. I don’t know why, it can have quite the grumpy face at times as seen in many photo captures. It’s a lovely fresh green colour though and I am a big fan of green in the garden, maybe that’s it. I’ve always loved seeing Greenfinch fledglings in the garden. So far, they are my fav fledglings for 2020

Sadly Greenfinches have seen quite a steep decline in numbers due to the disease trichomonosis. I’ve seen a good few with this disease in my garden in the past. So sad to see them unable swallow food and eventually die of starvation after about 5 days. I would see them sitting by water failing to drink too.

Happily, in recent years I’ve seen Greenfinches return to the garden and this year with an increase in numbers which is brilliant. Also brilliant is the little dance of this Greenfinch fledgling in the video below. I wish it lasted longer, I love it. Ah… I’ve missed a trick here, maybe I should have put it on repeat. It knocked off the planned blog post topic.

Bird calls I have never properly tried to learn. Well, not at all really. It would certainly help locate and ID garden birds during jungle July. I guess if I tried to learn just a few then I would be able to work out when there was a different one and then go from there. Small steps I think with this. Blackbirds I’m the most confident with but I had absolutely no idea at all what a Greenfinch might sound like until I researched recordings of its song What beautiful trills it has, all slightly different too. I’ve added a still video sound clip below.

It really has been great to see such a variety of birds bring their young to the garden. Especially when our nestbox didn’t see any eggs laid and young reared. I have a theory there, dramatic footage too. A story for another day. Today Siskins were seen at the feeders, perhaps they will bring in their young again. I’ve seen the less frequent, common Redpoll fledglings in the past. The odd single Song Thrush without parents too.

This morning I will breakfast by my gardenwatch window, with my real blog diary and a pen to record what I see. Will there be any new fledgling birds when I am sitting watching for an hour? If any do, which bird species will it be? House Sparrows? Adults are visiting more just now. Maybe a Tree Sparrow fledgling again? I’m thinking they could be a strong maybe.

I hope you are enjoying seeing fledgling birds in your gardens. Here in the UK we have slightly different seasons with us, here in Scotland, up to three weeks behind the very south of England. Perhaps, there will be fewer fledglings there now except in cases where the bird species has more than one brood. All fascinating stuff. Please share your garden sightings in a comment, it would be great to hear of them across different parts of the world too.

6 thoughts on “Greenfinch fledglings, who’s next?”