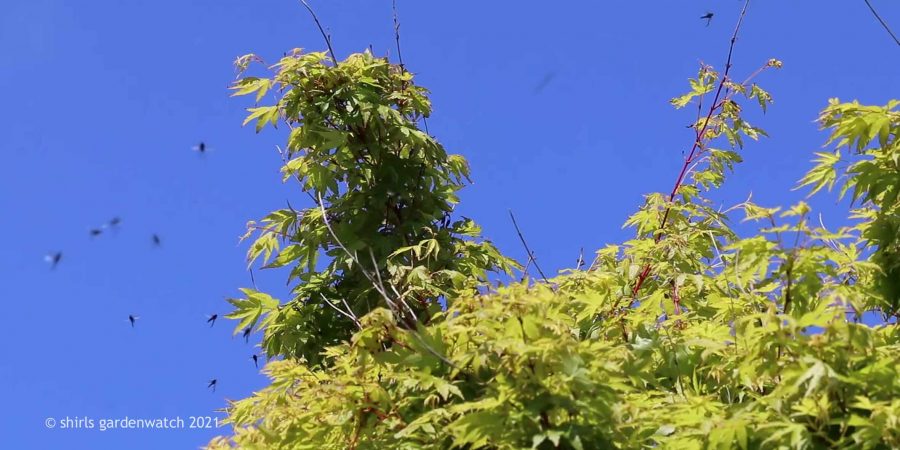 That was something I wanted to know last week, although I didn’t know it was legs that I was seeing dangling down at the time. These insects were odd looking en masse that was for sure. It could have been a tail I was seeing, they were so fast moving, quite jerkily too. They had swarmed in the garden, especially around an Acer tree. Image searches on an ID along with descriptions confirmed we were seeing Hawthorn flies, also known as the St Mark’s fly.

Bibio marci is the Latin name of this fly and it can be seen in flight here in the UK, in May. April 25th, St Mark’s Day, is when it emerges after spending most of its life as larvae living in the soil. This fly is in flight for about a week and then dies, it mates during this time. Here in Scotland, we are a good three weeks behind in the season seen further south in the UK. This is why this sighting was at the end of May.

These insects haven’t been the only ones emerging from larvae in the garden in the last few days. It’s also the time for the damselflies to begin emerging from the wildlife pond.. Unlike the Hawthorn fly, they are much harder to spot so perhaps they were around before the Hawthorn flies. Damselflies are seen perching on branches or plant leaves for a spell to dry out their wings before taking flight. They are such a delight to discover. I do love this time of year, it’s a new stage for the garden and gardenwatching. What garden visitors have you enjoyed in May? Did the Hawthorn/St Mark’s Fly swarm in your garden too?

This post was published by Shirley for shirls gardenwatch on May 8th 2021.

2 thoughts on “What are the black flying insects with long legs?”