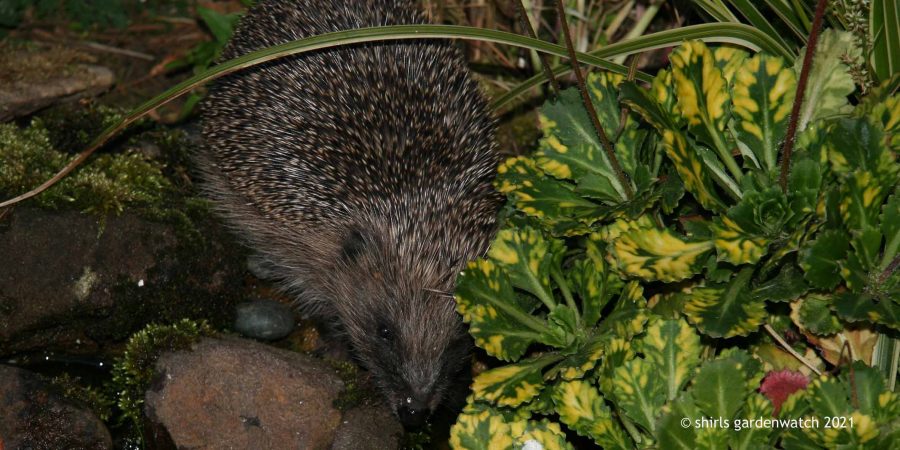 Today may be the last day of the British Hedgehog Preservation Society’s annual Hedgehog Awareness Week for 2021, but for the survival of this species our awareness needs to continue. Nature websites and social media are full of valuable information, especially from dedicated carers and rescue centres who are happy to answer questions. Reading and seeing images of hedgehogs visiting the gardens of wildlife watchers on social media is just brilliant! There is so much enthusiasm out there to help these much loved mammals. I’m delighted to be part of that.

Hedgehogs were first discovered visiting our garden back in 2007. We have been very lucky to watch them using a variety of IR garden cameras over the years. It has been fascinating watching their behaviour. Having said that, it would be amiss of me not to share video captures of hedgehog visitors with wildlife enthusiasts who may not be seeing them at all. Although in saying that, it was only by chance one night that I spotted the first one. I had no idea they were visiting. It’s likely my bird feeders were responsible for their visits.

It’s always hard to edit out favourites, but the following images support some garden observations. One video includes the familiar huffing sound a hedgehog makes. It wasn’t full volume for this behaviour either. Another video shows a hedgehog sliding its chin along the ground, that one had me asking Twitter hedgehog carers what it was going on.

I’ve often wondered if I’ve been seeing hedgehogs lifting their noses and smelling for water. I have no idea if they do but a supply of water is a life saver for hedgehogs during prolonged dry spells of weather. Ponds need shallow edges for wildlife to get out/in but any dish of water is appreciated for drinking. Hedgehogs can be seen drinking from our wildlife pond and from shallow plant saucers outside and inside garden feeding station. They are especially thirsty after eating dry food and take a good drink!

Observations over the years, have suggested to me that regular hedgehogs seem to follow the same routes through the garden. There are many routes too, as access is generous with long hedges on two sides of garden and space under the gate. Being a gardener that often mixes up border plantings and edges, I clear away as much as possible if I don’t finish during the day to save confusion. I also make sure there is a hedgehog sized space between structures, furniture and large plants with an option of a low route too. Sometimes, like below, I arrange stones as a step when I see them failing to negotiate the area around the feeding station.

Stopping cats getting to the dry kitten biscuits in the enclosed garden feeding station has been quite the challenge. I’m not alone there either. A removable winding tunnel was created with spare decking wood. This only worked when a small plant saucer with water was jammed at entrance, after advice from hedgehog carers. Cats don’t like getting their faces or tummies wet I was told. This water dish has an added bonus when watching through the captured camera footage overnight. A row of wet marks on dry ground tell me someone has been in!

It’s always a delight to watch footage of hedgehogs visiting overnight. I do try to identify them by markings, size and which direction they go first. It’s not always easy. Sometimes the same hedgehog will visit for a few nights, other times there will be two or three individuals over the evening and small hours. There’s only been a few occasions when two hedgehogs have been captured by the camera. In the case of the recent incident below, both hedgehogs choose the dish on the left as they come in. The 2nd hog takes objection to someone in his dish and gets a bit pushy.

It’s hard to see if the first hedgehog eats later, when the bossy one eats from the dish in the foreground. The video below shows it eventually leaves making his vocal huffing objection and a look back as if to say ‘are you not finished eating yet?’. It can be heard huffing its way out the entrance tunnel. You may need to turn volume up to hear it in there. The encounter doesn’t end there though.

The second section in the video below is a zoomed in capture from the wildlife pond camera (quality not so good) where the first hedgehog was quietly drinking. I thought it was going to be pushed in the water! However, it pushed properly back this time and there was a bit of a tussle at the edge of the border, top right. I’m guessing it was two males. They really don’t like to share.

Hedgehogs are happy to share one thing though, their droppings on garden paths, lawns and borders. It’s confirmation they are around. A good sign. They can be messy eaters too and can leave droppings at feeding stations/bowls. A previous video capture, had one hedgehog being disturbed by another in the tunnel (spines stood up) and pushed out a dropping inside, walking through it before leaving. Housekeeping was required in the morning!

After a previous incident with two hedgehogs, a back entrance was adapted in to the entrance structure. It’s only been used a few times, but I’m happy that if a hedgehog was pushed under the camera it could get out. As this is a shorter tunnel, and cats could be a problem, it had a one way feature in use. As other hedgehogs have been seen recently not going in the front entrance and are missing out getting access to food and water inside, it has been reversed for now. Footage is being monitored for cats trying to get in.

Sadly, coming back to the stats, the hedgehog is no longer in the endangered species list, having moved up to a vulnerable to extinction species in 2020. It’s also sad that our gardens and the food we provide, isn’t always helping hedgehogs. We can actually be harming their survival and don’t know it. I discovered that for myself. Bird food is bad for hedgehogs with sultanas bad for their teeth. I felt quite sick thinking about this, as I had excitedly shared videos of what hedgehogs were eating in my garden over the years. I was really giving them no nutrition and in the case of dried mealworms, actually harming them. Metabolic bone disease in hedgehogs is now more widely known. I posted about it discovering this in an update on feeding wild hedgehogs blog last year.

Awareness in helping hedgehogs has never been more important than it is now, I hope it continues through the whole year. I won’t be the only one, I suspect hedgehog carers will be top of that list! Please share your hedgehog stories here in a comment, I’d love to hear them and I’m sure others would too.

This post was published by Shirley for shirls gardenwatch on May 8th 2021.