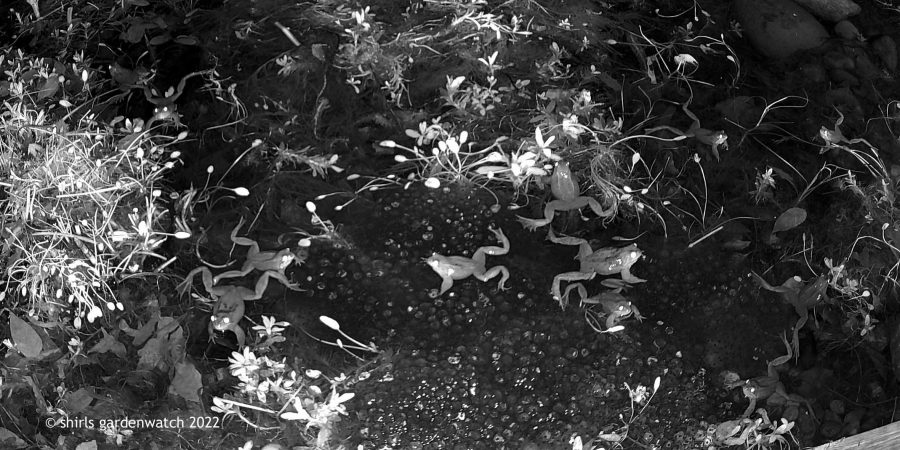 2022 saw our earliest frog spawning to date here in Perthshire, Scotland. It arrived unexpectedly on 15th March just as the opportunity of bright, warmer days made for a bit of a garden tidy. Clearing leaves and thinning out pond plants was top of the list but the job was half done when the spawn arrived. The early frogs weren’t impressed by their, safe from cats, central plant island which has been successful in previous years. They chose to lay their spawn in the very shallow area, still full of leaves, with an easy view for passing cats which have been a problem in the past. They were also out of sight of the camera fitted on a post, an upgraded one for 2022!

Timing was good for an early Mother’s Day gift of another updated camera which we fitted to an old, sturdy tripod! For capturing footage of night hedgehog visitors, we’ve always enjoyed the flexibility of a rooming camera on a low JOBY tripod but these Reolink cameras are a bit forward heavy for it. A block of wood screwed to the plate on the old tripod and the camera screwed to the block is working a treat for now. Yes, maybe didn’t catch any action of the start of spawning but the behaviour we’ve seen since has been fascinating. It’s been brilliant and addictive viewing with frog counting always ongoing. Twelve doesn’t seem a high number in adult frog terms, but it’s our pond record now and we are delighted!

There are a number of website pages with more information on frog spawning like the one by the Natural History Museum. I picked this one as it has a glorious daytime photo of a frog beside spawn too. I tried to capture photos myself, when I discovered via my cameras that they were tussling around the surface during warm afternoons! We had never seen that before and would have had no idea they were doing this had it not been for checking the cameras LIVE. I do love being able to do this. I very much appreciate the setup my OH has enabled. As I’ve a few photo captures and videos below, I’ll let them tell the garden pond chat.

Drawing attention to yourself was also a possible issue for spawning as the male frogs were heard croaking in the afternoon, evenings and during the wee small hours. What a spooky sound the camera recorded at 3am in the video below. With it being a quiet, still night perhaps the general atmosphere of the air led to this unfamiliar croaking sound. Can’t imagine passing cats heard this version.

It was tricky picking which clips to upload when there were so many with tussling frogs on the water surface. The next one where the static camera on the post backlights the cat’s shadow over the pond shows the frogs scatter below the surface had to be included. It’s no surprise now then that I couldn’t capture photos/video on my DSL camera during the day. I stood still for over an hour hiding behind an ivy pillar too.

The palmate newts were seen many times creeping, undetected under the frogs or to the side of the spawn, eating it. The male frogs were too busy with their tussles for best position beside the spawn that perhaps they didn’t notice the newts. Maybe they know it happens but their drive is to attract females to mate is stronger and they have no loyalty once the spawn is laid. The frogs constantly trampled through the spawn, leaning on its edges too. That surprised me the most, to my eyes the frogspawn was delicate and easily damaged. Clearly I was wrong as the tadpoles inside have been growing well inside their gel sacs after taking considerable traffic over them.

The video below shows one palmate newt clearly eating the spawn under the two frogs floating on the surface to the right of centre. I had previously read that frogspawn could be eaten by newts but it was fascinating to see it actually happen, LIVE too. Note the flick of the tail the newt gives and how it thrusts forward when it feeds. This flick of the tail reminded me of video footage caught one summer’s day back in May 2020. I never got round to uploading it but this behaviour had me searching the DSL camera recorded footage and sheds a different light on the IR image of the palmate newt. You can see what a pretty little amphibian the palmate newt is in the second video below.

Regularly blogging or not, gardenwatching is always ongoing. We are very lucky to be enjoying a garden that can attract wildlife. Recording sightings here is always something great to look back on, hence this first post of 2022! It’s particularly good to be able to share simple wildlife chat like this. Pre blogging I could never have imagined so much can go on in a regular garden. Now as a result of the variety of social platforms, websites with LIVE cameras, mobile phone apps and camera capabilities, more people are aware of wildlife and the plights for its survival. Small things we do can help, like picking flowering plants for pollinators when at the garden centre – that’s my go to now!

Enjoy your garden and the space around you. It’s great connecting with nature and the outdoors. Out and about from their hibernation, hedgehogs have been back visiting the feeding station which is wonderful to see again. I hope you get to see them too. It’s 9pm and the LIVE cameras are displayed on my PC monitor as I check over this post pre publishing. On queue, a hedgehog has just wandered into the enclosed feeding station and is currently munching into a bowl of kitten biscuits – fantastic!

The cameras are also showing a palmate newt in the shallows of the tidied side of the pond and the nestbox with some moss brought in by a blue tit. Maybe we will at last see this nestbox of a few years get used by a breeding pair. That would be great! The frogs were still tussling about last night but no sign of them just now, maybe its too early for them. Wishing you some great garden moments for 2022, out and about too! This really is a very special time of year for our gardens and wildlife and I hope you enjoy it as much as I do!

This post was published by Shirley for shirls gardenwatch on April 7th, 2022.