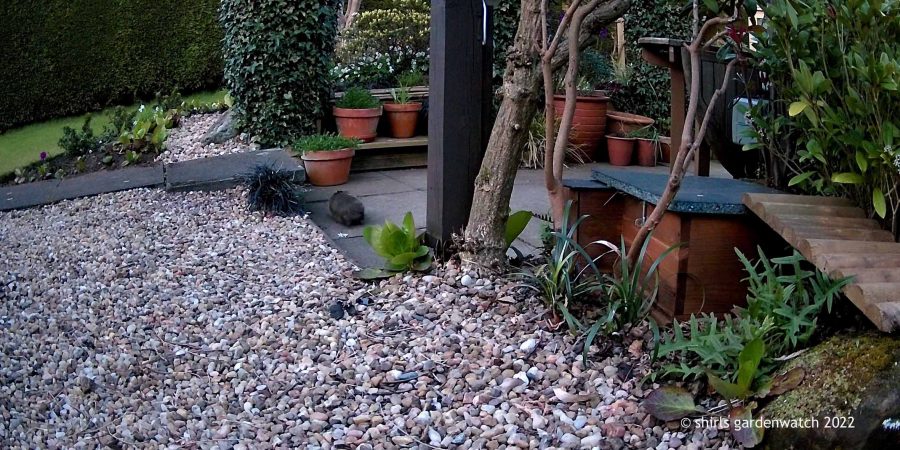 April 2022 has been, to date, THE best hedgehog watching via the garden cameras in all my time blogging! What a very special gardenwatching month this has been. Eleven videos in one blog post does seem a bit excessive but it was really hard knocking footage down to even that! As the hedgehog is a vulnerable to extinction animal here in Britain, I wanted to share a good flavour of it for those who don’t see it. It’s a brilliant garden record too. So what’s been different from previous years of hedgehog visitors?

An occupied hedgehog house, that’s what has! What an absolute delight it has been to see the comings and goings of the male hedgehog which has taken up residence there. Yes, a female would ABSOLUTLEY trumph him, but not likely due to its central location in my garden. This house is very roomy though, cosy too with my very generous stuffing of hay plus the leaves the male in residence has brought in, so that might make it attractive to a hedgehog mum with her babies. However, this male is being a tad territorial so he’ll probably hold on to it as long as he stays in the area.

I’ll not chat on too much to allow you time to view your pick from the videos below. They are pretty short apart from the two minute one where the house resident finds another hedgehog at the feeding station before he gets there. April has been quite a dry month here in Perthshire, Scotland although it has ended with rain today. As I type this at 9:22pm, with the camera IR views up on my monitor, our resident hedgehog hasn’t appeared. Haha he must know that I’m taking about him. Rain won’t stop him going out on his travels though, I’ve seen hedgehogs appear in the enclosed feeding station in some truly awful nights. Enjoy this flavour of hedgehogs visiting and staying over in a garden. I really do hope you get to see them too.

Watching the behaviour of our resident hedgehog has been just brilliant. He’s had routines like taking in leaves every time he went out or came in. He’s not seen doing that now, he must have enough for now. He always goes straight across to the feeding station when he leaves the house in the evenings and before he returns from his travels. Sometimes he’s home about 3am, sleeps an hour and then goes across to the feeding station and then has a small wander. It’s been such a huge delight and privilege to be seeing part of the life of a wild hedgehog.

Tomorrow sees us going into May and it’s set to be another brilliant gardenwatching month. Another special one! Yes, fingers crossed we will see continued hedgehog activity. It’s been a full on video editing and uploading day to get this published by the end of the day. A hedgehog has just appeared on queue into the feeding station. I can’t tell from this angle if it’s our resident male but by its size, I think it’s a different one.

So what’s going to be the special gardenwatching for the month of May? Well, after a wait of six years, we’ve got birds nesting in our new(ish) camera nestbox. It’s the first time this box has been used too, which is brilliant! The last nest, which was successful, were coal tit’s back in 2016. Prior to that we had successful great tit’s in 2014. Our only successful breeding blue tits were in 2010. May 1st/2nd have been the dates that first eggs have been laid so we are hopeful that tomorrow morning we are going to see the arrival of our first blue tit egg in 12 years!

This post was published by Shirley for shirls gardenwatch on April 30th, 2022.