Yesterday was another busy day at the Nestbox. Our nest-building female Blue Tit was working particularly hard in the morning. She clearly fancied a change of colour and brought a sample in as you can see below! 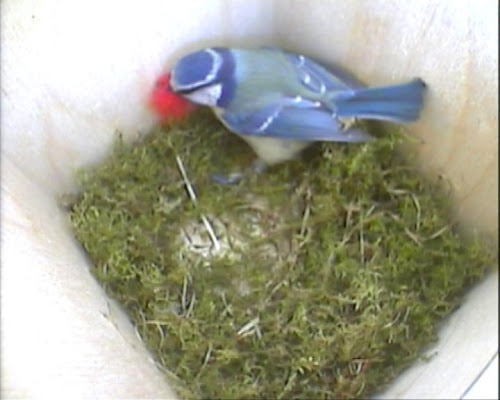 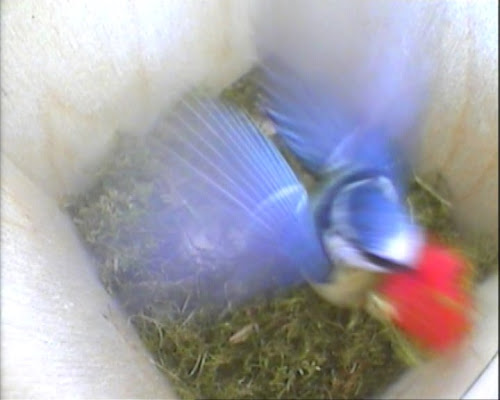 Too much moss then – is that the problem? So now it was the turn of the moss to go again – maybe too much of a contrast to the red for her? The problem is when you start making changes you start to reconsider.

Everything must go! This seemed to be her next course of action and the very full and fluffy nest was almost emptied in a very short time. I had the video camera outside recording this in action and will add a video or two here tomorrow to show her from outside the box. 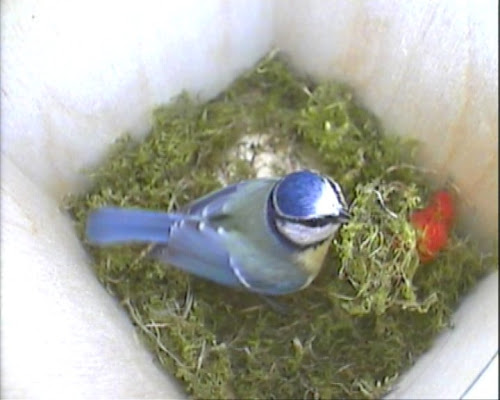 A bit late perhaps came in the male with some food to reward her hard work as you can see below – he is on the right. You can see the video of this moment also. Although I do wonder if he noticed any progress at all after his last visit! Maybe if he had come earlier she wouldn’t have been quite so ruthless.

I did wonder if the drop in temperatures expected had any bearing on her decision to knock the nest build back again – how clever if it has. However, today the nest is back on schedule again but it looks like she has a different supplier as new material has been brought in. Now the nest isn’t as pretty as it has been and this newer material looks rougher. I could say that she knows what she is doing – but does she?