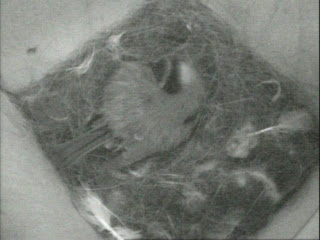 Today as I made an early check in our Camera Nestbox and I saw our female trying to sleep. She did this a few times between spells of re-adjusting the nesting material around her as she sat in the cup of the nest. I have never noticed her do this on other mornings – she was clearly tired and last night we did notice her feathers a bit ruffled looking as she went to sleep. 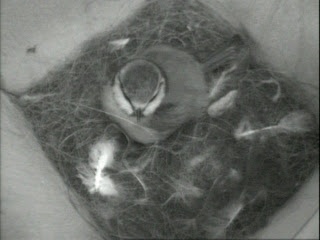 She kept me guessing giving only tiny glimpses of an egg below. I looked in at 5.30am and 22 mins later she left the nest and only then I was able to see she had laid another egg. We now have five – four sitting at the top of the cup. I am still concerned about the first one which is deeper in the nest cup but hopefully she will bring it up to join the others. 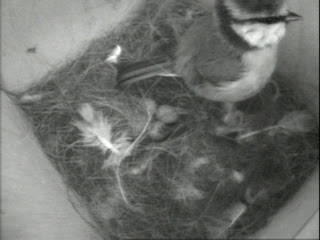 When she left she flew straight to the Cherry tree opposite perhaps to join the male – with the blossom and leaves and could not see where she was. I wonder how many more eggs she has left to lay. 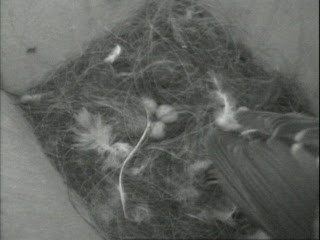 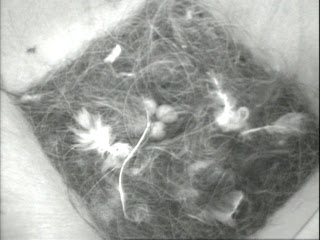 Male Update: As I was about to publish this post the female came back into the Nestbox. She sat in the nest cup a while and was breathing quite fast. She must be tired – was she hungry too? She went to leave then stopped in the entrance hole to look about. I then spotted a Blue Tit on one of the feeder hooks. I looked back into the box she was still there! I hoped it was the male.

The female then flies across to join him and I was delighted to see him feed her. He then flies off briefly with what I could only describe as a fast fly-by past my window then he returns to the feeders. He takes out a sunflower heart and takes it up to the female, who did not move, and feeds her again. He then flies off and up into the cherry tree. She then flies down to the sunflower hearts and eats some – he has understood she needs to eat more for energy. All this activity would have gone unnoticed had I not been looking for it.

Finally, as I was making breakfast, before starting to write this post I noticed there were many birds scurrying around the ground looking for the sunflower hearts and sultanas. Two birds caught my eye, Song Thrushes, and I kid you not they came quite close to my window and stared straight at me! It was quite amusing they would move a little and stare again. I guess I should really go outside now and top up the feeders. The Song Thrushes regularly use the bird table too – they were so shy when they first arrived too!