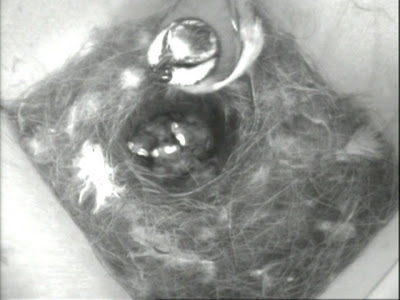 It is almost 8am and the three young Blue Tits in our Camera Nestbox are still with us. I managed to get some fat cake last night – thank-you Tesco! I hung one in a tree and placed another on the secret feeder and this morning I have seen both the male and female find the one in the tree which is a start. I also bought a bag of RSPB Sunflower mix that has smaller grains in it which would be perhaps easier for the chicks – I know this is not ideal but both the male and female keep bringing seeds in.

The male has been in this morning and brought what looks like some sort of bug, as you will see above. However, he did appear a tad confused when the chicks were not too interested in it. They did open their mouths and he did pass it round them all to taste – he is good that way. He then left with his offering only to return shortly afterwards for a second try – he got no takers at all that time!

The female is also going out for spells this morning – probably to eat herself and also to search for food for the chicks. They both do try to get bugs first before going to the fat cake and the seeds – I can see their searches in my garden. It is another damp and chilly morning so the female will probably need to spend time in the nest cup again to keep the chicks warm.

A Starling and its chick have just found the fat cake in the secret feeder – ah well! There isn’t much space for them in there and perhaps only a few more will find it – I would imagine it could last a few days anyway. However, I have a third fat cake in reserve. 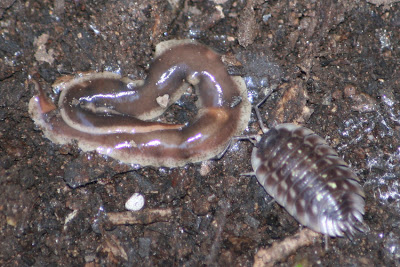 What else is still with us? Well if you are unfortunate enough to have already seen what is shown, beside the woodlouse, in the photograph above in your garden then you will know what it is. On the other hand, if you are worried about finding one in your garden and don’t know what to look out for this will definitely be of interest to you. The photograph above is of a New Zealand Flatworm found under a pot, a good place to find them first thing in the morning, in my garden during a tidy-up at the weekend.

Don’t despair if you find one in your garden. I first found the Flatworm in my garden around 10 years ago. Granted, I did get a surprise to see one at the weekend as I haven’t seen one for a few years now! I have already written a lengthy post on them about my experience with useful links which you will find here. My garden has survived with very few earthworms since then – if it is drier this afternoon I will go out with the video camera and film part of it.

What did I do with it? Well, firstly, as you can see, I got my camera out and photographed it. My daughter was watching from the window – but she wasn’t the only one! I had planned to put it in a jar of salted water to destroy it – you will see more on that in my other post. The blackbird who had been watching me had other plans for it – as I went inside to put my camera away he snatched it and run off with it! My daughter didn’t see if he ate it. I have to say that is the first time I have ever seen a bird take one. I cannot imagine the poisonous enzyme within it would be good for a birds digestion but experts suggest that they have not harmed the birds of the UK.