This afternoon I had some visitors in the garden that I have never noticed before. Since writing this gardenwatch blog I am paying much more attention to all my visiting wildlife.

Butterfly identification is completely new to me – but I can now spot a small tortoiseshell quite easily now. I went out with my camera to photograph the birds this afternoon but noticed something in the distance on the flowers of my tall Verbena Bonariensis. I was very curious what it was but as I got closer I was able to see that it was quite a collection of butterflies on the same flowers – there was no need to share either as there were plenty of flowers to go round! I didn’t have a lot of time to spare so the photo subject was quickly changed from the birds to the butterflies. 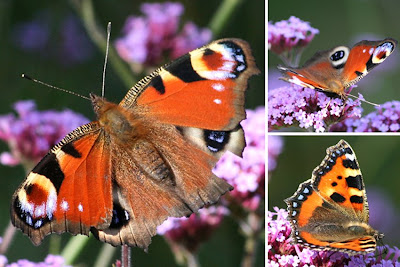 The Small Tortoiseshell butterfly can be seen bottom right in the photo above. I have caught that one with my camera before and it is probably the most common in my garden. There were quite a few visiting at the same time today.

The Peacock butterfly can be seen in the main photo (with an unusual cut out of its wing) and top right above. You can easily see how it got its name. This butterfly is one of the six species in the BBC Springwatch Survey that people were asked to record their first sightings of this year. Together with frog spawn, the seven spotted ladybird, the red-tailed bumble bee, the hawthorn with flowers and the swift these records will help scientists to understand how spring is changing and what needs to be done to help wildlife thrive in the UK. However, today was the first time I had noticed the peacock butterfly in my garden. I was able to identify it by the peacock feather eyes in its wings. I don’t think for one minute it was its first visit – but I was thrilled to have seen it! There were at least two visiting today.

The reference book was out for the next ID. I took photos which helped and I was thrilled to discover that it was another species of butterfly. I initially thought it was perhaps a younger tortoiseshell. I now had photos of a painted lady butterfly – but not just photos. After taking my first photos I quickly ran inside for my video camera. The video below shows a painted lady butterfly – there was only one visiting that I saw today. Note it has a tear in its wing. I would imagine they get tears and cuts in their wings by getting caught in tight spaces.

Finally as I began writing this post I looked out on our hedgehog feeding station. There I saw our hedgehog munching its way through the peanuts I put out for it. It’s great that we now have quite a wildlife community in the garden. But all is not completely well!

Yesterday I had spotted a lot of feathers on the far end of the lawn near the hedge. I suspected cats although they don’t usually leave that kind of mess. Today as I walked in front of my CATWatch unit here I found another mass of small bird feathers. I moved once again in front of the unit and it showed that it was still working okay. My next thoughts were to contact the manufacturer – I took a photo. I went out for a few hours. On my return I saw an old visitor to my garden – the Sparrowhawk! It has been some time since I have seen it. I will now predict that after two visits in two days we will see it return. I know its nature but I have no intention, should I see it, of photographing a Sparrowhawk with its kill.

The video and photos above were taken in my garden on September 19th 2007.

2 thoughts on “Painted Lady and Peacocks”