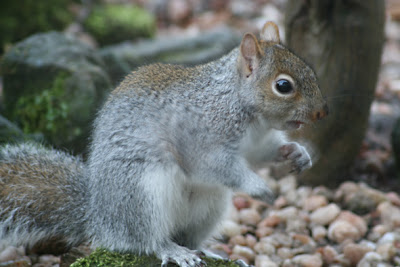 Well, once again wildlife has found my garden after I have put out food for the birds. The peanuts have done it again! Although I have feeders for the birds I usually only put sunflower hearts in them. I tend to scatter peanuts and sultanas on the ground often under the little Acer tree, at my back door and opposite my window, for the group of blackbirds that visit.

The peanuts and sultanas I believe are what attracted the hedgehog visits to my garden although I haven’t seen many visits recently. Okay, so the title says it all but I cannot resist telling a story with some captions for my pictures!

Okay so I’ve found the peanuts – now where could I hide them? 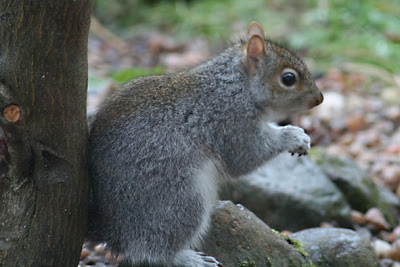 Mmm I’m thinking about it… perhaps nearby? 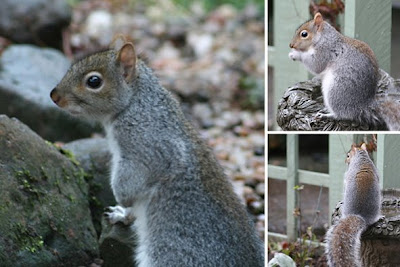 Okay, a quick check to see if the coast is clear. Ahh the bird bath helps I can see a spot now. Mmm I’ll be cool about it and not give the game away!

Yesterday, I grabbed a late lunch and as I was preparing it I noticed the squirrel above through my window. It was a very, very, windy day and it had rained in sheets for spells. I noticed the bird feeders were quite quiet but then again they are in need of filling up but I wanted to clean them first. I always throw food on the ground when this is the case and that is probably why the squirrel stopped on its way through my garden. In the last week we have spotted it on a couple of occasions walking on the ground and having a drink from any puddles then scurrying off.

I opened the window and threw some more peanuts under the tree then quickly set up my video camera inside. With the rain and wind the sky was heavy and dark but I did manage catch it and although it is on the dark side and once again the processing isn’t the best but it still captures the visit well. Did you notice the squirrel patting the ground after it had buried the peanut? It is always tricky deciding which pieces of film to use. On a dry day I can put my camera outside but then again it isn’t remote control so I cannot follow any wildlife as I can from inside. So taking pictures from my video or digital camera do loose a bit in quality as they are through glass but I was still thrilled with them as this is another first for my gardenwatch.

Finally, I would like to point out that the grey squirrel has observed the colour theme of my border that it has chosen to store the peanuts – it is my silver border! Okay I have to be honest now as a gardener and say as these plants are fairly young and I wonder if it will break or damage the main stems. I really wouldn’t be happy about that. I also don’t know if I would be happy if this squirrel took all the peanuts every day and if it brought friends! Mmm a tricky balance, but for now I am enjoying our newest visitor to the garden a I hope to see it return.

The photos and video of the grey squirrel shown above were taken in my garden on 5th December 2007.