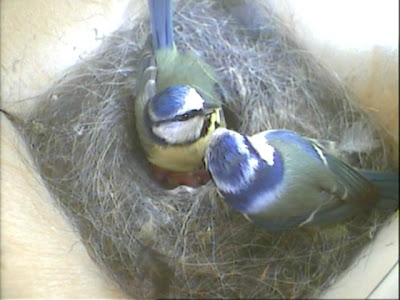 Valentines Day yesterday was not only about the hearts, flowers and romance. It also saw the start of National Nest Box Week here in the UK which I mentioned last week . As you can see below, romance is also a juicy caterpillar for the female blue tit as she keeps her young chicks warm in our Nestbox in May last year.

If you already have a Nestbox or are thinking about putting one up you may also be interested in the Nest Box Challenge which was launched last year during National Nest Box Week. I didn’t know about this until after the brood in my Nestbox failed last year. This year as I will have diary updates here anyway I will also add my Nestbox to the records for the UK.

A blue tit rooster has been in residence in my Nestbox since the end of October. I also have a pair visiting during the day. I have also spent a lot of time looking through video clips and snapshots from my Nestbox trying to ID the birds. It has been fascinating to see that some of the birds have unique markings! 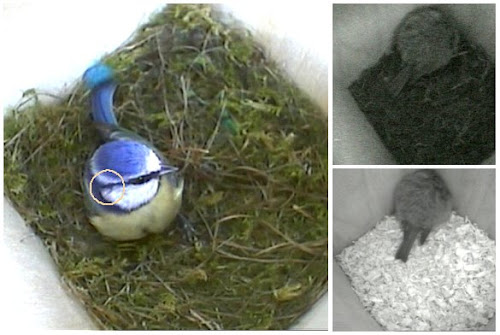 The photo above shows the 2007 female making her nest – I have circled the area in the head that I am trying to ID between the birds. On her first sleep- over, top photo, back in April 18th 2007 she is in the right hand corner. The brighter, torch lit, photo was the first roosting sleep-over that we were aware of back on October 28th 2007 – same corner, was she back again? 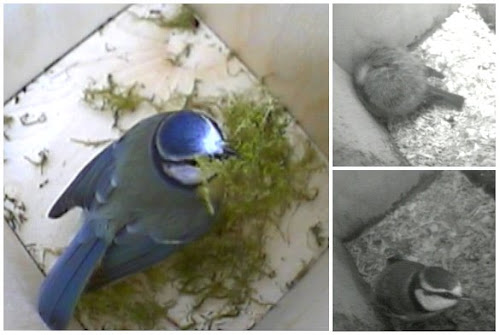 Only two nights saw the rooster on the right hand side. It then moved sides to the left hand side – or did it? Looking at the photo montage above you can once again the 2007 female nest building.

The roosting photo was taken in January 2008 (with the use of a torch) and is definitely the 2008 rooster. I also watch it come in our Nestbox ‘live’ so I now know this bird quite well. I am taking a guess that our present rooster has been the same bird since the beginning of November 2007. You can also see she has a different marking on the side of her head.

So what’s going on in my Nestbox at the moment? Well I have a different Nestbox Challenge going on here! I wonder now who will in fact finally use this Nestbox for nesting. Let’s look at the ‘known’ contenders…

From left to right we have the daytime pair first. The male with the curl on his right cheek and the female who is much smaller. The black and white photo is of our female rooster (I am assuming she is a female) with her distinctive ‘v’ cut into her eye strip marking. Sorry, I am not a birder and don’t know the correct terms. I have also wondered if the daytime pair are the pair that used our box last year.

Let’s have a look once again of the first visit to our new nestbox last year on March 2nd 2007 – only two days after we put our Nestbox up! Our box is only lit by natural light and shows colour only when light levels are good. The male comes in the box first and the light levels flicker as the female is at the entrance.

I have searched through video and I don’t think the crown of the head of the 2007 male is the same as the 2008 male that is visiting during the day. I have some video that you can look through to see what you think. However, I find this absolutely fascinating and I can’t wait now to see a nest being built in April – assuming that one will be built of course!

The next video is of our rooster a little confused with the Nestbox after we cleaned the damp wood shavings on January 12th 2008 after we repaired a leak in the roof. She is seen fluffed up ready to roost but she just couldn’t settle that night. She eventually did and returned the next night and has been roosting since…

The last video shows the female of the pair that are visiting during the day. She is first heard singing her little heart out! This was taken mid morning on January 19th 2008 and she followed her song with some housework. She removed the droppings left by the rooster! She did this for a few days but doesn’t always do this now. In the video I have repeated the sound through the rest of the clip…

Finally, I would like to wish everyone who already has or is thinking about putting up a Nestbox a very successful season for 2008. Oh yes and remember to have a look at the Nestbox Challenge website too as there are lots of links there too.

All photos and video above were taken in my garden.