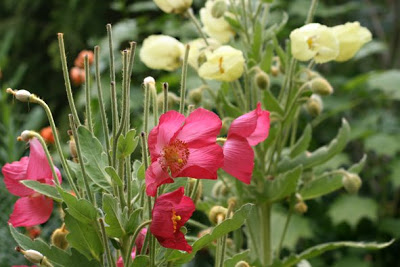 …. we have red and yellow meconopsis too! Yolanda from the Netherlands discovered on her recent garden tour of Scotland that there are blue meconopsis in many gardens here. Perhaps that is a surprise to others too.

What isn’t as common is the red and yellow ones but I found some on a recent visit to Branklyn Garden when I went to take photos of the blue meconopsis as I knew they had good sized planting along a path there which looks fantastic. 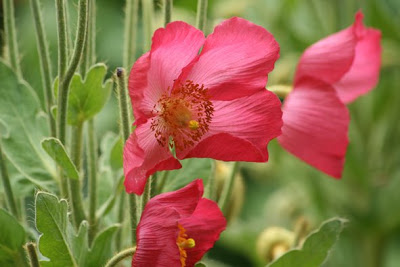 I did remember I’d seen a red once a few years ago but it wasn’t quite like the ones I saw on this visit. The way the light streamed through the red ones really was quite magical as you can see. 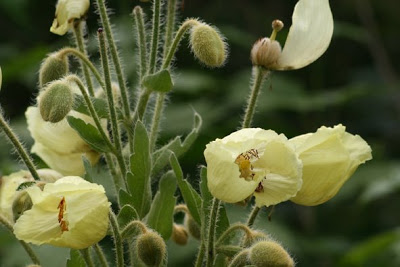 What was interesting, when I think about the location of these plantings now, was that the red and yellow were in a slightly more open situation within the garden getting more light than the main plantings of the blue. Maybe that’s the conditions that suit them. 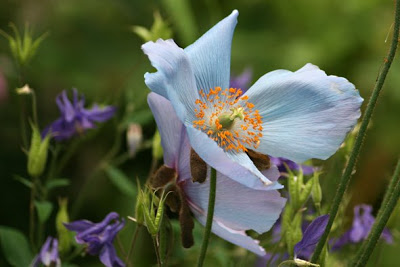 The blue meconopsis is still my favourite and I loved the way the deeper blue of aquilegia looked growing alongside it. I wonder if that was planned planting or the seed blew there from another border. I love when that happens. 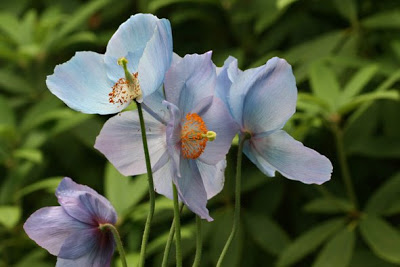 This garden is packed with plants and I love it at this time of year. I don’t often visit it in the summer months but perhaps this year I will as recently I heard it is quite a green garden then. 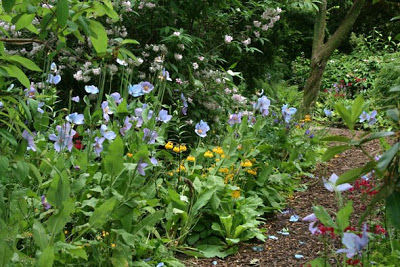 I love the red and yellow candelabra primulas planted in this meconopsis lined path. This is the area I came to photograph and it was difficult choosing the few blue photos to show. As you can see some petals are on the chipped bark path. I have found that the wind gets mine too although I hate to see petals on the ground in my garden as I only have a small number of flowers. However this pathway looks great with them gently blowing along it. 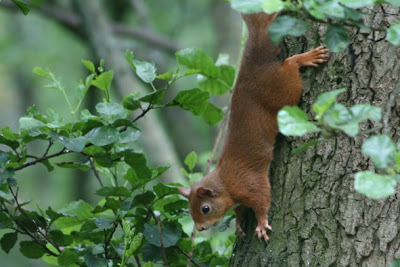 Continuing with the red and yellow theme I thought I’d tie in some wildlife and birds. It is been a while since I have posted on either I know. We have had a fair bit of rain and wind which always seems to coincide with time I could get outside with my camera in my own garden.

It is the school holidays here so I have been out and about. I put my camera, video camera and tripod in the boot of the car when we go out just in case I should want to use them. On some visits I know I will get the opportunity to use them like yesterday morning. We paid a return visit to Loch of the Lowes where we sat behind the viewing window with a coffee and hot chocolate as we watched the wildlife visiting the feeding stations. My video camera was ready to record!

I always look for different activity at the feeders or on the ground but if a red squirrel comes along I always try to capture images of it. We only saw one on this visit. Unfortunately with lighting and people moving around behind me (especially with light coloured clothing) there is movement in my capture which also makes the squirrel look a little lighter in colour too. But as it was a closer image than the one from my last visit I thought I would show it. I love the way it strips the skin off the peanut.

Many of the smaller birds at the feeders are familiar to me here as I see them in my own garden but the Yellowhammer is not. I have seen it feeding on the ground here but it does appear quite timid and doesn’t stay around too long. Yesterday I was on the lookout for it.

It briefly appeared in the same area as I had seen it before. I moved to another seat. I waited patiently, watching the tree branches, for it to arrive. It came and fed with the siskins and other birds on a hanging feeder. I found it amusing to watch how all the birds fed together. What I did notice though was that the yellowhammer did appear to be alert at all times where the younger siskins just got stuck in and hardly lifted their heads.

Watching the different behaviour of my visiting garden birds is something I have really enjoyed but I just don’t see to have had the time recently. It is fascinating. I captured a few more pieces of video at Loch of the Lowes that I will post soon. I must get some close-up bird feeder footage from my own garden soon. There are a number of plants in flower now too – I hope they are still in flower for Bloom Day on the 15th of the month. I cannot believe we are near that time already!

The meconopsis photos above were all taken at Branklyn Garden on June 17th 2008. The red squirrel photo and the videos were taken at Loch of the Lowes on July 7th 2008.