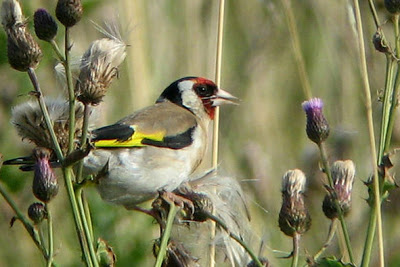 Seeing a juvenile bird being fed by a parent in your own garden, for me anyway, rates up there as one of the golden moments in the garden – especially if the juvenile in question is a goldfinch! Before writing this gardenwatch diary I had never seen (or should I say noticed) a goldfinch in my own garden.

I also had no idea that there were different species of birds known by the same name. I have to say I have found this very interesting and when I have discovered this, with birds seen in my own garden, find I am drawn to finding images to see this difference for myself.

Carduelis carduelis is the goldfinch that is seen in my garden. The first image below has been taken from Wikipedia. I have chosen to show it as it shows this bird feeding from thistle seeds. I originally put thistle seeds (niger seeds) in my feeders but let’s just say that they germinated far too easily under my feeders! When I discovered that they loved sunflower hearts just as much that suited much better as they were not the only birds that loved them! 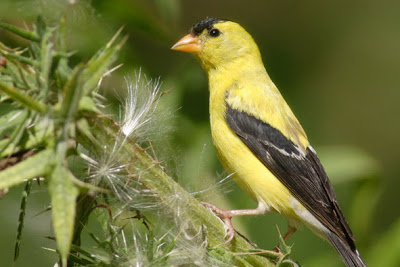 Carduelis tristis, (in the second photo also from Wikipedia) is the goldfinch that I have seen in many of the American blogs that I visit. Now it really looks ‘golden’ so I really wonder how the goldfinch visiting my garden got its name. You can see that it also enjoys thistle seeds. I wonder if it likes sunflower hearts too. Maybe one of my blogging friends could answer that?

Now, I know nothing about this bird but reading Wikipedia it said:“The American Goldfinch (Carduelis tristis), also known as the Eastern Goldfinch and Wild Canary, is a North American bird in the finch family. It is migratory, ranging from southern Canada to North Carolina during the breeding season, and from just south of the Canadian border to Mexico during the winter.”

Comparing like with like I then looked up what Wikipedia said about the goldfinch that visits my garden. It said: “The Goldfinch or European Goldfinch (Carduelis carduelis) is a small passerine bird in the finch family. It breeds across Europe, North Africa, and western and central Asia, in open, partially wooded lowlands. It is resident in the milder west of its range, but migrates from colder regions. It will also make local movements, even in the west, to escape bad weather. It has been introduced to many areas of the world (Snow and Perrins 1998).”

The first time I noticed goldfinches in my garden it was at the beginning of the year – two years ago. I don’t remember now when they left. I just didn’t see them during the spring and summer months. Funnily enough during the wet summer of last year and the wet summer (so far) of this year they have stayed in my garden. I also believe now that there could have been juveniles last year too.

Why was I unsure? Well, I had never been sure what they looked like until today. I have a treat for you now in the video below. Wind, background and traffic noise often spoil video footage and that is why I add music but in this case I have left it as it was. You can hear the chirping of the young goldfinch quite well as it demands food. How mechanical its wings look too don’t you think. It looks more musical box than real!

Processing couldn’t really keep up with the speed the juvenile goldfinches wings! You will also have seen a plant blowing across the screen at the end when the wind caught up speed. The plant is teasel and I have planted it with one thing in mind – photos of the goldfinch feeding on it! I wonder if I will see this at all. I wonder if other finches and birds will feed from it too.

Last but by no means least I have video of another juvenile in my garden. This was the planned subject of this post until this morning. Juvenile blue tits from our Camera Nestbox would not be seen in my garden this year as the chicks did not survive. However, it has been wonderful to see them visit from other successful broods. They really are delightful to see in the garden.

Finally, with this increase in juvenile birds I also saw the return of another bird today – the Sparrowhawk! I’d guess this time of year is easy pickings for birds of prey. Mm… the blue tit was alert enough to the helicopter flying overhead but the goldfinch did appear a ‘sitting duck’ on the tree branches. Fingers crossed for them both.

The photos above taken from Wikipedia see GNU Free Documentation license, Version 1.2 or any later version published by the Free Software Foundation; with no Invariant Sections, no Front-Cover Texts, and no Back-Cover Texts.