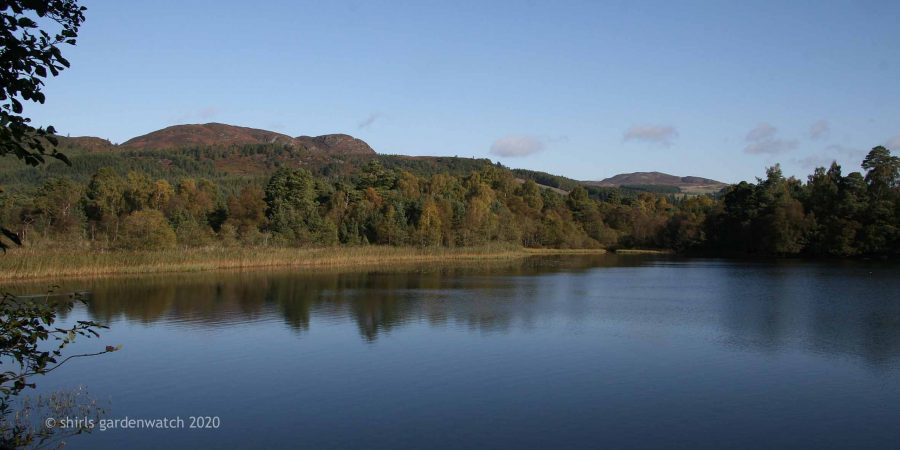 Well almost, a good near 2nd. The loch view above, seen from one of the visitor hides at SWT Loch of the Lowes, is maybe missing from the garden but recent activity seen from my gardenwatch window, pretty well matched what I’d see from the observation window in the visitor centre. Garden focus had been on hedgehog visits for this last while but it was like a switch was flicked last Thursday and the feeders were the busiest I’ve seen them in a very long time. Garden birds have certainly caught my attention again.

The best thing of all was, I was sitting doing a bird count at the time. Usually when that is done, typically, the birds go into hiding but this time more appeared and not all regulars at that. The morning started with a bit of garden pruning before an early uplift of garden waste. I walked round the side of the house to discover a red squirrel darting about the borders. It didn’t run away, it kept an eye on me. That was the start, but I didn’t know that then.

A bird count, during a later than usual breakfast, by my gardenwatch window seemed like a plan. 9:45am -10:45am was maybe not the optimum time though, but I hadn’t done a count in a while so went for it. Blue tit juveniles started the chase in the garden, six were counted. Then it just went from there, coal tits and great tits came with juveniles too. I’m used to seeing the fast activity at Lowes feeders but this was not usual for this time of year here. It really was like a switch was flipped.

The finches joined in and the species count just kept on rising. The only problem was I couldn’t count everyone due to the speed they were travelling from feeder to feeder, just like at Lowes. I didn’t know which direction to look next. It was brilliant. I never thought of a comparison with Lowes until members of my family mentioned it. They were right too. Sitting with a coffee at my observation window (with it having a low sill too) felt just like at Lowes, at home.

What was missing, was the like minded people to chat to about bird sightings at my window view. At Lowes, I’ve enjoyed hearing stories of what others see in gardens here in Scotland, the UK and further afield too. I was delighted to spot on Twitter that the visitor centre had reopened recently, with safety measures in place. I’ve embedded the tweet below to show an image of the observation window set-up. I wondered how they could do this in such a small space. The seating is in almost exactly the same place as before. I’d like to wish all well, staff and visitors.

The red squirrel didn’t appear in my hour’s count but it did return later. As usual I took many photos, but this had to be the one picked for this post. This is something I haven’t seen at the Lowes observation window, a direct look inside. It’s not shy, this one. By the lack of tufts on it’s ears I’m guessing it too could be a juvenile. It returned this afternoon to find only sunflower hearts in the feeder that had lots of peanuts last time. A hanging peanut feeder was rejected in favour of returning to a spot that it buried nuts. I would never have guessed it would look them up so soon, or indeed find them again. It didn’t, but it was in the right area. More peanuts were added later, should it return tomorrow.

So the bird count species list included the blue tit, coal tit, great tit, greenfinch, goldfinch, chaffinch, siskin, house sparrow, robin, dunnock, blackbird, woodpigeon and a curious carrion crow. House martins, were seen flying over the garden too (we have a nest at the front of the house) and two more surprise visitors took the species count to 16. Surprise number one was a willow warbler. For it to appear in a bird count, that was very lucky. Not so lucky was, it didn’t get to stay long. It hasn’t been seen since.

Surprise visitor number two during Thursday’s breakfast count, species number 16, was a surprise beyond surprises! This bird probably followed the tit families to the garden, so the books suggest. Useful to know for another time. It caught my eye when it landed on a feeder post and flew off quickly, but not because I recognised it. I had been watching a robin and thinking how colourful it looked just now. On seeing this surprise visitor, my first thought was that I had seen an unusually coloured robin. Strange that.

I didn’t get a photo. Then later, the penny dropped on an ID. A nuthatch had landed in my garden, a NUTHATCH! This is a bird that has moved it’s range north into Scotland but it is by no means widespread, not at all. As mentioned above, I’ve only seen it twice at Lowes and I’ve gone many times looking for it. How thrilling to know this bird species has been seen in my area. It may just be passing through, but I’ll take that! Brilliant, as said above, this bird was on my garden wishlist. I do hope it returns now.

Below are some garden snapshots and video captures from Thursday through to today. After my bird count, a song thrush was spotted bouncing its way through the borders, it was great to see again too. Greylag geese also flew over the garden. It never ceases to amaze me what a huge variety of birds are living in my area that pre blog (with the exception of the nuthatch) I had no idea of. Slideshows of all the bird species that have visited the garden can be seen here in a page at the top of my blog. It just goes to show what I had been missing before I put up bird feeders.

It was a wood mouse feeding in a hidden, hanging bird feeder that caught our attention. I’m guessing the young wren didn’t know what it was. My curiosity lay with wondering how many sunflower hearts could a wood mouse stuff in its mouth to run away and cache. Thinking video over a photo would capture this best, I set camera to record. The wood mouse is regularly seen running away with food from here, but I got a surprise capture here. Surprise number one was it just sat eating a peanut just as the red squirrel does here. We both got a surprise with what happened next…

I wonder if others have seen an influx of bird activity, as we have here. Please share your stories in a comment below, I’d love to hear them. I’m looking forward to sharing video footage of our hedgehog visitors soon. I’m just getting used to new video editing software (nothing to do with WordPress) so they are taking a bit longer. Just discovered after posting this, I’ve uploaded videos without removing sound track and they have white noise. I’ve edited a sound track adding some audio from there which should update soon.

Looking forward to getting our new bird feeder camera up and running this week. I wonder if this new location will work out. We have one more camera to set up, can you guess where this last one is going?

This post was written by Shirley for shirls gardenwatch on August 31st 2020.

4 thoughts on “Lowes at home”